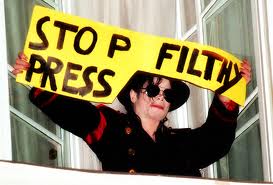 Los Angeles, CA â€“ This Press Release is respectfully submitted to you from: TEAM MICHAEL JACKSON

We are demanding that Mr. Michael Jackson be treated with the same rights afforded to each and every other American citizen â€“ TRUTH AND JUSTICE!

It is NOT the time to report negative nor untrue information about Michael Jackson.   Michael was murdered â€“ he is not the one on trial for Murder â€“ Conrad Murray is!

We have noticed that certain news media are already reporting false information leading up to the Trial of the Century!   Please do your research and only interview those who really knew Michael.   Unfortunately, there are so many people that want to get their 15 minutes of fame and do not represent or have any authority whatsoever of the facts of Michael’s life or death!

Team Michael Jackson represents the WORLDWIDE L.O.V.E. and SUPPORT of Michael’s millions and millions of Loving Fans around the World!   We will defend any nonfactual, inaccurate, dishonest, and untruthful information being spread about Michael Jackson!

WE HAVE HAD ENOUGH! It is NOT Wacko Jacko, It is MICHAEL JACKSON! It is NOT pedophile, It is humanitarian! It is NOT guilty, It is innocent! It is NOT bleach, it is Vitiligo! It is NOT addiction, it is injury! It is NOT a freak, it is emotional abuse! It is NOT suicide, it is homicide! LEAVE HIM ALONE!

We are a base of constituents, representing millions of interested people around the Country and the World, who are dedicated to this case and its final outcome.

We look to you as the news media to represent, in good faith, the best interest of Justice, Mr. Michael Jackson’s Family, his millions and millions of fans, and most importantly, Michael’s three children, who no longer have a Father because  he  was taken away from them so tragically!

THIS IS THE TIME â€“ WE NEED TO BE MICHAEL’S VOICE AND LET THE ENTIRE WORLD KNOW WE DEMAND JUSTICE FOR MICHAEL JOSEPH JACKSON FROM AROUND THE WORLD.

Please respect Michael Jackson’s Memory, his Children, his Siblings, the rest of his Family, and His Fans and ONLY REPORT THE TRUTH ABOUT MICHAEL JOSEPH JACKSON!!!

Thank you very much in advance for your prompt attention to this very, very important request.     We look forward to your immediate positive action towards reporting the TRUTH.

To learn the TRUTH about the Murder of Michael Jackson, please visit:

Please bookmark www.teammichaeljackson.com and check often to receive the latest information on the case, status reports, and news releases issued.