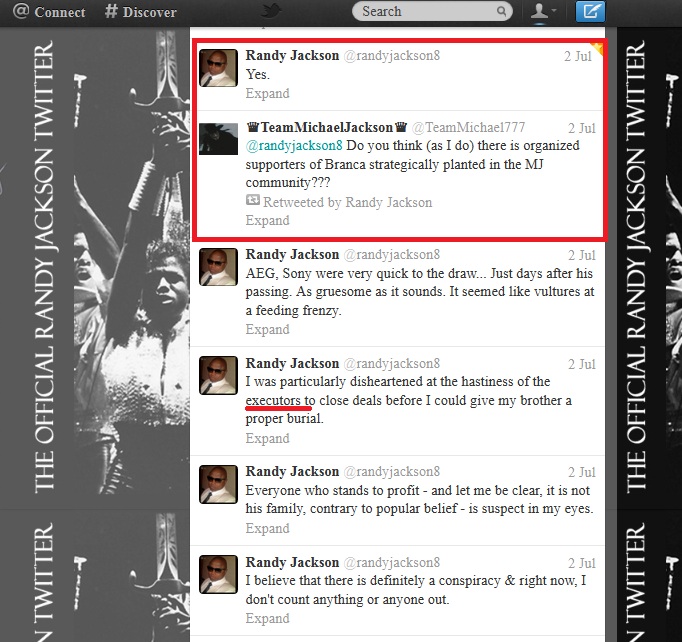 Siggy is a very sweet kid, shame some group leaders are using him for their own AGENDA!! Siggy knows nothing of the history of JOHN BRANCA!

Randy Jackson who hired Tom Mesereau! Who saved Michael Jackson in 05!! Randy knows Michael business better then anyone on this planet!!!!

“John Branca was a man that my son was very worried about. Michael told me on more then one occasion that he did not lke this man and did not trust him, he told me John had stolen from him.”

“Katherine repeatedly objected to their appointment at the court hearing.” http://articles.philly.com/2009-07-07/entertainment/25289530_1_john-branca-attorney-court-hearing

“The will is terribly flawed.. Misspellings and discrepancies, etc, The oly reason why this will passed through was because ….
https://twitter.com/#!/randyjackson8/status/87234431600963584

While we were in shock & grief, they did a good job of attacking us from all angles with contracts, the movie, the will,countless legal docs
https://twitter.com/#!/randyjackson8/status/87235566697062400

When u r in such grief, it’s hard to process business. And things of this importance need special attention with a clear head.
https://twitter.com/#!/randyjackson8/status/87236306391928832

The will was of great importance, but at that time, giving my brother a proper burial was more important.
https://twitter.com/#!/randyjackson8/status/87236901655937024

“It was all so overwhelming, we’re all still in shock. I can’t say too much… But please know, it’s not over.” Randy Jackson.

How many of you, given the chance, invited to Michael Jacksons funeral would NOT GO!!! When a person can not even pay their respects to the dead, how can they protect and do the best for that person Legacy!!

Janet Jackson hosted a two-hour meeting of her famous family during which private investigators presented explosive evidence to claim Michael‘s will and trust is a fake, according to one of the King of Pop’s former advisors. Source

Please! Dear MJFam, PLEASE BE-AWARE of Haters in the community, running BIG forums all financed by John Branca, These groups seem to be doing a good job, by upholding Michaels legacy, but under the surface they want to divide and conquer the community with HATE, they are everything Michael was against, they do not want us to fight for justice, they dont even want LOVE to exist!!! They will lie and say Michael was a member of their fan club, but provide no proof, We have checked with Michaels management, Michael was NOT part of any fan clubs, or forums!!

A Fan club that openly hates on Mrs Jackson, calling her a pimp, a fan club who openly attack Michael young daughter!! One that claims it hates all the Jaxn fam, except MIchael, are now using Siggys interview to spread more misinformation!! They are LIARS!! Majestik agreed with a comment, “Stay out of Jaxn fam business” not JOHN BRANCA is a good guy!!!! what a pathetic joke, those who call Majestic derogatory names, are now using his words to support their lies and agenda!!

Its not hard to see the fakes,, stay away from them!!!

WATCH OUT FOR THE SPIN DOCTORS!!! http://www.teammichaeljackson.com/archives/4117

You may be mislead further after this post, by some saying Mrs Jackson did not sign that declaration! Well we have that covered too, Mrs Jacksons attorney did make such a claim. for which he was Fired!!

Katherine Jackson has just escalated her battle royale with the Michael Jackson Estate by firing her lawyer.

TMZ has obtained a letter Katherine sent to Adam Streisand, wishing him the best on the one hand … and giving him the boot on the other.

The letter does not explain the reasons for the firing, simply saying, “… I have decided to move in a different direction.”

But sources connected with Katherine tell TMZ … she’s upset that Streisand gave TMZ a statement yesterday in which he said Katherine “denies signing any statement to the court that makes accusations against the executors of any wrongdoing with respect to her son or his estate.”

The Heal the World Foundation had filed a declaration — purportedly written by Katherine Jackson — in which she accused John Branca of being a crook who stole from Michael.

Streisand told TMZ Wednesday, “She did not and would not make any such statements about the executors.”

Letter From MJ Family to John Branca &amp; John McClain to STEP DOWN!!