WHO IS TRENT JACKSON 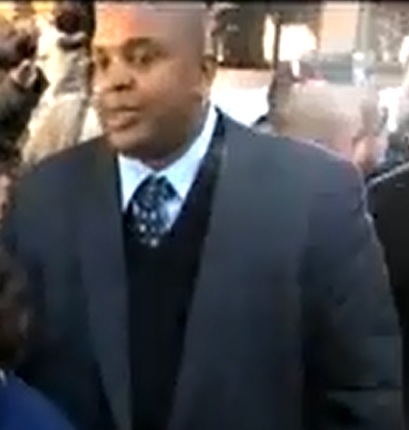 There is a pending investigation with the LA County Sheriff’s Department for elder abuse naming Katherine Jackson as the victim. Those being investigated include her nephew Trent Jackson, estate executors [for Michael Jackson’s estate] John Branca and John McClain, and Jackson family advisors Lowell Henry and Perry Sanders, Jr.

Now that it’s confirmed Katherine Jackson is safe with her family in Arizona, the Jacksons are ready to take aim at the family member, they say, is “the very person and persons we are trying to protect our mother from.”

Trent Jackson, the son of Joe Jackson’s brother, currently lives with Katherine Jackson at their Calabasas home. For years, the family has suspected that Trent has been profiting from stories surrounding his cousins … Paris, Prince and Blanket, even selling exclusive photo opportunities and stories to a tabloid website. 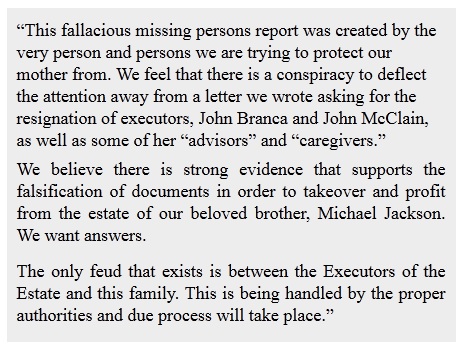 A source tells X17online one website claims they have a source within the Jackson family giving them exclusive stories and the family now believes, “without doubt,” that the source is Trent.

As for the pending elder abuse investigation, certain family members have already been interviewed by authorities, and we’re told, they’re “closing in” on Katherine’s nephew.

When asked for a statement on the investigation, LA Sheriff’s Department spokesperson Steve Whitmore declined to comment.

Read more at http://www.x17online.com/celebrities/michael_jackson/katherine_jackson_elder_abuse_trent_nephew_missing_persons_report_investigation_072312.php#IVKsRX4378BvKuiE.99
Trent Jackson is the man who has been mentally/emotionally abusing Paris Jackson! PPB waved goodbye to Mrs Jackson, but when Trent told Paris “Grandma is missing” of course this frightened this little girl! This man Paris trusted has been lying to her, which caused Paris to publish those tweets, I commend The Jackson family for staying united, and not letting anything get in their way to save Mrs Jackson and Michael’s babies, Thank you to all those fans who showed support to the Jackson family during this very difficult time, You all displayed how much you are truly in spirit, image of MICHAEL JACKSON! God Bless You all,,,
STOP FILTHY PRESS!!! HOW FOOLISH Alan Duke OF CNN Must feel  right now, for supporting Trent Jackson in the bogus “missing persons report” by being the root of this story around the World! I guess he had his reasons, which would be EXCLUSIVE ALL ACCESS PASS TO Prince, Paris, and Blanket Jackson!!!

Read more: http://www.abcactionnews.com/dpp/entertainment/katherine-jackson-family-feud-escalates-fight-with-janet-jackson-and-paris-caught-on-camera#ixzz21hb0gk3I
Look out for the crocodile tears. Did he say “My home” errmm you are just the hired help!! By the way, it was Trent that gave this video to TMZ and other media, i am sure he got paid handsomely for it, Trent has sold many stories over the past three years to media, Any story you have read about the family has come from him, remember all the photos that TMZ had when Oprah was at the house recording,  those came from Trent and Lowell Henry, these two leaches do  not pass a chance to make a buck!

Visit NBCNews.com for breaking news, world news, and news about the economy

Katherine ordered Trent Jackson off the property. You may recall, Jackson’s security — and Trent in particular — thwarted Monday’s attempt by Randy, Jermaine and Janet to take the kids to Arizona.

They may try to talk their way out of why Randy, Janet, Rebbie were barred from their MOTHERS home, but why Mr Jackson, why children, babies http://rolandmartinreports.com/blog/2012/07/roland-s-martin-exclusive-janet-jackson-others-family-members-barred-from-moms-california-home/