WHILE THE WORLD MOURNS MICHAEL… PHONY $$$$$$$$ONY CELEBRATES ITS SPOILS 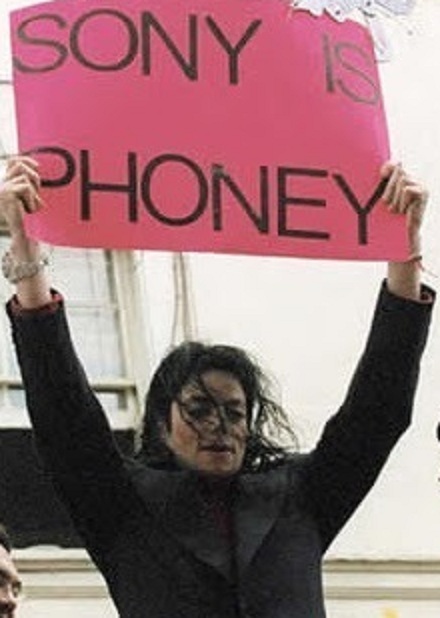 Sony (NYSE:SNE), General Motors (NYSE:GM) and Kellogg (NYSE:K) were three large-cap companies which posted their quarterly earnings reports prior to Thursday’s [August 2nd,2012]  market open , as 13 companies with market caps of $10 billion or more took their turns posting their important numbers for investors before the opening bell…

Sony reported numbers that were well off projections, then lowered guidance for the year to even lower levels. The company posted a net loss of $314 million, which was 60 percent higher than a year ago and 11 times higher than Street analysts had projected. Revenue was up 1.4 percent from a year ago, however, while operating profit was down 77 percent. The company also lowered its guidance on net profit by 33 percent from its previous projection and lowered profit projections by more than 25 percent. Sony is now working on a four-year run of losses.

NOT SO FOR SONY/ ATV!

Amidst company-wide losses Sony Music is one of just a handful of Sony divisions reporting MAJOR PROFITS over the past several years.

Sony Corp.‘s fiscal woes continued in its fiscal 2012, as the electronics giant announced a record net loss of $5.74 billion.

However, its Sony Music division turned a profit in the company’s fiscal year, which ended on March 31, 2012. Sony Music made an operating profit of approximately $$461.69 million in its fiscal 2012, with sales of $5.54 million. However, this was a six percent drop from the previous fiscal year, when sales were at $5.7 billion.

In Sony’s fiscal Q4, Sony Music reported an operating profit of approximately $40 million, down from Q4 a year earlier, with sales of over $1.3 billion.

BY ALL APPEARANCES, MICHAEL’S PASSING  SIGNIFICANTLY BOOSTED THE DIVISION.

WITH MICHAEL’S VOTE OUT OF THE WAY,  SONY AND ITS MONEY MEN IS FREE TO MANAGE THE SONY/ ATV CATALOG, ALONG WITH THE FRAUDULENT “MICHAEL JACKSON” ESATE, AS THEY SEE FIT.

SONY’S LONG TERM GOALS OF GLUTTONY … er… ahmmm…  DOMINANCE OVER THE MUSIC INDUSTRY HAVE BEEN REALIZED!

“The Sony Corp. of America led investor consortium completed its acquisition of EMI Music Publishing today, just hours after the Federal Trade Commission issued a statement saying it closed its antitrust investigation of the $2.2 billion deal — which meant it received regulatory approval.”

And lets not forget to give credit to A LITTLE HELP FROM THEIR FRIENDS:

“The driving force behind the film negotiations with Sony was Jackson estate – represented by Branca and McClain- which had to grant permission: Branca’s firm, Ziffren Brittenham, negotiated the deal, in consultation with Phillips…

…As AEG worked to put together the movie and its soundtrack, it took shots from Jackson family members and others that the company is more interested in profits than promoting Jackson’s legacy. For his part, Randy Phillips shrugs it off. “The problem with Michael is his death, is as messy as his life was,” he says…

(thank you Mr. Phillips for your candor… too bad Michael did not know what a Wolf in Sheep’s clothing you truly are…)

Lest we forget the infamous Michael album and its TRUE reason for being.

The agreement comes in advance of the Sept. 18 release of “Bad25,” a new two-disc-package and DVD that marks the 25th anniversary of Michael’s landmark “Bad” album. The Warner/Chappell agreement was fulfilled with the release of the “Michael” album in December 2010, sources say.

Did you REALLY think they wanted to put the BEST of Michael Jackson into its content? PLEASING YOU, THE FAN, IS NOT WHAT THEY ARE AFTER … or is it more along the lines of NOT GIVING YOU A CHOICE

“Public Knowledge believes that that type of market power would raise prices, harm independent labels and unsigned artists, and stunt the growth of innovation in the music industry. At such a high rate of consolidation, no new digital music service could exist without the blessing of UMG and Sony (and only those that do business on UMG and Sony’s terms would get their blessing).

Competition among production and distribution intermediaries in the music industry ultimately gives more choice to musicians and leads to better market offerings for their fans. Competition among distributors increases the diversity of choices for consumers, empowering consumers to choose the services that best fit their needs at the best price. If one or two major labels obtain enough influence to stifle the development of new digital music services, those services never will be able to gain traction in the marketplace, and potential competitors will fail, not on their merits but based on the service’s inability to strike a deal with an inordinately powerful supplier. As a result, both musicians and audiences will suffer for lack of innovative competitors in the online music service marketplace.”

“More than half the members of subcommittee of the Senate Judiciary Committee, which met Thursday to hear testimony on the antitrust implications of the pending Universal Music-EMI merger, have received campaign contributions from the two music industry giants.”

This entry was posted in "L", Blog. Bookmark the permalink.