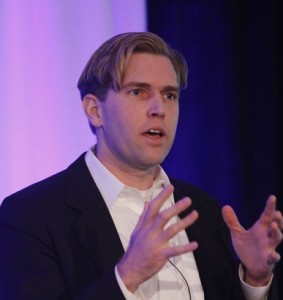 SummaryAEG attorney Sabrina Strong did the direct examination. Briggs is an expert witness in this case.

He was asked to assess the projections of Arthur Erk, plaintiffs’ retained expert.

Briggs is a senior management director at FTI Consulting and professor at USC Marshall School of Business.

Briggs said he helps a media company put together forecast and assess risks of projects.

He has done work for talent agencies as well, like Creative Artist and William Morris.

Briggs has worked in over 1100 engagements, 300 of those related to the music industry, like Rod Stewart, Bruno Mars, 50 Cent, Usher.

Strong: How many film engagements have you had over the course of your career? Briggs: Probably 600

Briggs said some of his predictions have been inaccurate. “I don’t have a crystal ball,” he said.

He has been doing forecast in the entertainment business for 15 years.

Briggs studies Economy at Brown University and received his MBA at Anderson School at UCLA.

FTI Consulting has about 4,000 employees worldwide. Briggs is charging $800 an hour. He has spent approximately 350 hours.

He has testified once in an England tax matter, equivalent to our IRS, and on an arbitration case.

Briggs said he has had significant involvement in most of the 1100 cases he worked on. “I’m not taking credit for somebody else.”

Briggs overarching opinion on topics: 1- It’s speculative whether these projects would occurred 2- The numbers projected are speculative

“My understanding is that damages cannot be speculative and I didn’t want to prepare a speculative,” Briggs said.

MJ had a prolific career which resulted in a catalogue that results in a lot of money every year. Briggs did not analyze that.

He said he looked at income MJ would’ve generated for performing, going on tour.

“My opinion relates to opinion MJ would have generated by working,” Briggs said.

Strong showed an exhibit with “Erk’s TII Tour: Speculative” – No agreement beyond 50 shows – MJ’s drug use

“As of the date of death, there was no agreement that AEG or MJ would go beyond 50 shows,” Briggs said

Briggs: MJ had a significant history of drug use, and this was significant to render my opinion.

“There’s significant testimony on the record from four medical doctors in this case regarding MJ’s drug use,” Briggs explained.

Briggs: As part of my job, I’m asked to analyze all sorts of things, including drug use for someone who needs to perform.

“It’s all about the same thing: the risks,” Briggs said.

“My conclusion, based on the evidence presented, MJ’s life expectancy was very short as of June 2009,” Briggs said.

“MJ was taking drugs in very dangerous ways, had history of taking drugs that had a long lasting impact on his health,” he opined.

Briggs: MJ had a unique history of great performance but cancellations, particularly in cases where they were practically certain to happen.

The expert said MJ canceled a number of dates on Dangerous tour to enter rehab, canceled HBO special in 1995.

Also, the Millennium concert didn’t take place, theTwo Seas arrangement where nothing came of it.

“The world tour depends on the completion of the 50 tours,” Briggs said.

“There’s always a risk of whether the audience will perform and whether the artist will show up,” Briggs testified.

He said Guns N Roses, U2, Lady Gaga, Van Halen — all cancelled shows that were pretty certain to happen.

“The four additional tours are also entirely speculative,” Briggs said. They were based on Erk’s personal opinion.

Briggs: MJ had agreed to do 50 shows when he died and was actively engaged in rehearsals.

Strong: Do you have an opinion on whether MJ would have completed the 50 shows at the O2?

“My opinion is that it’s speculative whether the 50 shows would have been completed,” Briggs said.

“There was a significant heath risk in place and the length of the tour exceeded 9 months,” Briggs explained.

Judge then adjourned trial until Monday at 10 am PT. We only had half a day today and will only have half day on Monday as well with Briggs.

Potential witnesses for next week: Debbie Rowe, video deposition of Randy Jackson and Rebbie Jackson. We hope to see you then!