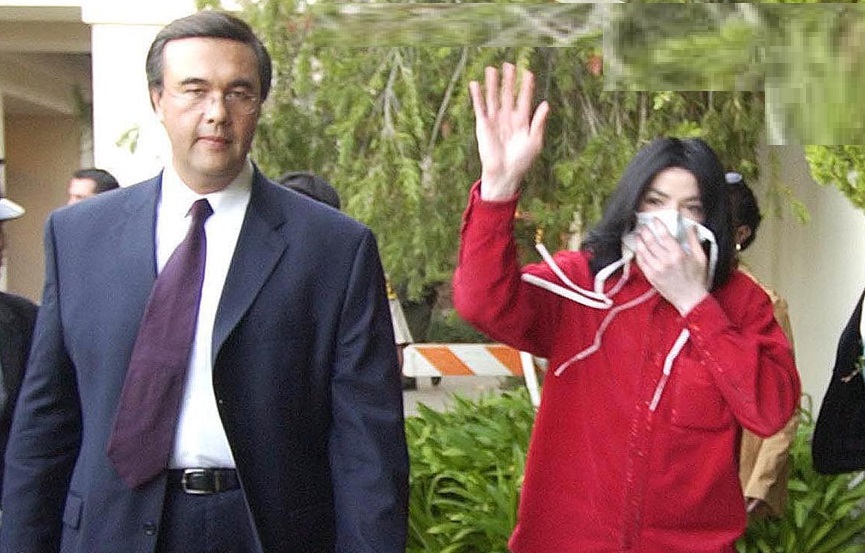 LaPerruque said 2001-2004 were very difficult years for Michael Jackson. They were also very busy years. MJ was recording “You Rock My World” single and shooting a short film at the Universal Studios when LaPerruque began working for the artist. Change showed clip of “You Rock My World” with Marlon Brando and Chris Tucker and MJ. The single became part of “Invincible” album. LaPerruque was present when the song was recorded. In 2002, LaPerruque said Blanket was born. MJ was very excited about being dad again. LaPerruque went to New York with MJ to be at the Apolo Theater with President Bill Clinton to encourage people to register to vote.

Chang showed clip of President Clinton introducing MJ to the crowd. She also showed the 2003 American Bandstand 50th anniversary in Pasadena and MJ’s cameo in “Man In Black 2” in 2002. Chang: Did MJ have a good sense of humor, including about himself? LaPerruque: Yes

Chang asked about MJ passing out in Florida and his children called 911. LaPerruque said he doesn’t know what caused him to go unconscious. LaPerruque said paramedics are more prepared than him, as former sheriff’s deputy, to assess a patient. LaPerruque never saw the paramedics report. They did no take the MJ to the hospital. Chang asked if there was a mention of low blood sugar in the report. Defendant’s attorney objected based on hearsay and judge sustained it.

LaPerruque said it was hot and humid that day in Orlando and he does not know when was the last time MJ ate or drank anything. The head security never saw drugs in MJ’s room. “I never saw the doctors actually treating Mr. Jackson,” LaPerruque said. He said he only took MJ to doctor’s office and would wait outside. Chang: Did you ever raise concerns to Dr. Farshchian you thought he overprescribed medication? LaPerruque: Yes

“There seemed to have been a social relationship between Dr. Farshchian and Michael Jackson,” LaPerruque said. Chang: From 2001-2004 went through a lot of pain, stress and anxiety? Objection, vague. Sustained. LaPerruque was never aware of the kind of treatment necessary to treat MJ’s vitiligo and burned scalp.

In 2007 – 2008 LaPerruque worked back with MJ. He had never heard about Dr. Murray. Chang: Would it be fair to say that throughout the years you worked for MJ you never saw him overdose? LaPerruque: Yes

LaPerruque raised his concerns with Dr. Farshchian, Dr. Slavitch in San Francisco and Grace Rwamba. At one point, LaPerruque and Rwamba had a system to try to stop doctors to overprescribe drugs to MJ.

Chang: Have you ever see him with terrible case of chills? LaPerruque: No

Chang: Have you ever seen an alarming weight loss? LaPerruque: No

Change: Have you ever heard people complain they could see his heart beating through his chest? LaPerruque: No

Chang: Have you ever seen MJ lost, paranoid? LaPerruque: No

Chang: Did you ever hear MJ saying that God was talking to him? LaPerruque: No

Chang asked if LaPerruque saw those symptoms, what would he have done? “I’d have been very concerned and if I thought it was life-threatening I’d have taken him to the hospital,” LaPerruque said.

Randy Jackson was by himself when he arrived at Neverland by helicopter. He did have a pilot, though, LaPerruque clarified.

Chang: Did you ever hear Randy Jackson speak about an intervention? LaPerruque: No.

Chang: Did you ever hear the word intervention that day? LaPerruque: No.

Chang: Did you ever know there was an intervention? LaPerruque: No.

MJ was acquitted of all child molestation charges and left the country after the verdict.

Rwamba contacted LaPerruque to go back to work for MJ. He said he wouldn’t have jeopardize his job at the time if he thought MJ was on drugs

LaPerruque never observed any problems in 2007 with MJ being under the influence of prescription drugs.

Chang: Do you have any idea who was in charge of MJ’s finances in 2007? LaPerruque: Raymon Bain
The head security said he learned Bain became MJ’s manager in 2006. She was the CEO/president of MJJ Productions. She signed his contract.

Chang asked if LaPerruque noticed there was a transition with Bain’s position at the time he wasn’t paid. He said he didn’t know.

LaPerruque said he wasn’t aware of MJ’s worth and/or debt at that point. He received call from Bain said MJ would not be needing security.

LaPerruque said Janet Jackson hired him and other personnel to work at the May 14, 2009 event, which was her parents’ anniversary.

The event took place at Chakra Indian restaurant in Beverly Hills. That was the last time LaPerruque saw MJ, a month prior to his death.

Chang showed picture of MJ on June 2009. Chang: He did not look anything like this, correct? LaPerruque: Correct.

The fact that MJ was one of the most famous artists in the world didn’t change his way of being humble, LaPerruque said.

LaPerruque told the jury there was a time where MJ asked him to go to Toys R Us to buy as many presents he could.

He said MJ wanted to give the toys to the children at the Women Shelter in Hollywood, Florida.

He said MJ spent thousands of dollars there, and MJ decided to declined his appearance because he didn’t want it to become a media circus.

“We went and donated the toys,” LaPerruque said. LaPerruque said MJ learned with his mother to give money to the poor.
Chang: Based on your observations and the things he told you, did he love his mother? LaPerruque: Yes C: Did she love him? LP: Yes

LaPerruque described MJ’s relationship with his children as excellent. “It was a very loving relationship,” he said.

LaPerruque: They wanted to be with their father, I think MJ was the happiest when we was with his children.

He said MJ wanted them to really want something and appreciate what they had.

MJ would restrict his children to one present and one present only when they went to a toy store, LaPerruque testified.

MJ’s intention was for the kids to really want something and appreciate what they had, LaPerruque explained.

LaPerruque: Not only that, he pushed them toward educational type of toys that they could’ve learned from.

“He wanted to be the best father ever,” LaPerruque testified.

One of the things LaPerruque remembers the most about Michael Jackson is the fact that MJ was always kind and gentle with his children.

The 2001-2004 period was the time MJ was trying to quit addiction to drug use, wanted his family away from Neverland, LaPerruque said.

For the parents’ 60th anniversary party, the restaurant was closed for Janet Jackson and the party members.

LaPerruque: In my course of employment with Mr. Jackson we’d have a room for him for down time also called green room. LaPerruque made sure the room was set for MJ upon arrival. They first saw each other in the main room but talked in the private room. Chang: A family member come to the ranch on one occasion, right? LaPerruque: Yes. Chang: Was MJ always able to perform and complete his functions? LaPerruque: Yes.

Chang: If there was ever a time he could not get up on stage to perform, that would’ve been a concern for you? LaPerruque: Yes

LaPerruque is then excused. Eric Briggs returned to the stand to conclude his testimony from last week.