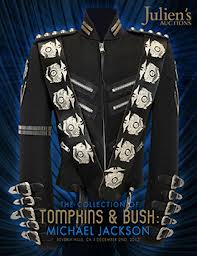 I ordered a Tompkins/Bush Catalog for $75.00 with $10.00 shipping & handling fee from Julien’s Auctions mid-October 2012, for the Auction that will occur on December 2, 2012, of Michael’s Jackson ’s belongings.

I contacted Julien’s to inquire as to the status of the catalog that I purchased well over a month ago, but still have not received.

Here are the three (3) DIFFERENT EXCUSES they provided to me:

1.         They first said they had already mailed it and if I didn’t receive it by that Friday to contact them.  Well, it was NOT and I STILL HAVE NOT RECEIVED IT!

2.         The next “excuse” they provided to me was that the Catalog would be mailed out at the end of that particular week.  Well it was NOT, AND I STILL HAVE NOT RECEIVED IT!

3.         Then, they said it would be mailed out the following week from the date I had called.  Well it was not, AND I STILL HAVE NOT RECEIVED IT!

AS AFOREMENTIONED, I STILL HAVE NOT RECEIVED MY CATALOG THAT THEY TOOK MY MONEY FOR OVER A MONTH AGO.  I ACTED IN “GOOD FAITH,” BUT IMO, JULIEN’S HAS NOT!!!

I THINK THAT IT IS POOR BUSINESS, PERIOD!

The more “run around” from Julien’s I received, the more I thought this must be planned to “put people off” until they really will mail the Catalog.

But again, I couldn’t understand WHY?

Well, I feel it is to advertise early, get people to purchase the catalog, charge them for it and then mail it when it is most beneficial for Julien’s.

I noticed that since my insistence on an answer to why they advertised the Catalogs as available, but still have not mailed them after billing that they have recently put a statement on their website as follows:  “Note: printed catalogs will not be mailed until mid-November, 2012”

However, if this were true, I would have received it by now as it would only take a couple of days since I paid enough for U.S. Postal Service Priority (2-day) mailing.

SO, WHERE IS MY CATALOG JULIENS?  WHEN WILL I RECEIVE IT?  WILL I EVER RECEIVE IT?