Once again, I rarely submit anything to this website, I only help maintain it.  However, I wanted to update fans on some of the things I recently came across.

Last time I wrote, March 16th, just 2 weeks ago, the site was about to be shut down by the Estate/web sheriff filing bogus infringements to our host,  you can read about that here.  At that time they had listed multiple pages (108 of them) citing the trademarks “Michael Jackson” as well as “The Official Online Team of the Michael Jackson Estate” as the infringements.   We aren’t infringing on anything.  This site isn’t claiming to be either.  We are a fan site sharing news about anything and everything related to Michael.  And we HAVE that right.  LEGALLY.

This is a screen shot I took this morning from this sites Google webmaster acct. (click to enlarge).

When web sheriff tried to have the site removed back in November – they made requests to Google to remove all links pointing to our website (basically trying to remove all traces of us).  This is noted on the bottom of the above photo.  Google denied their requests.

Well in March, once again, they tried to shut the site down again with more bogus infringements, so this time Taaj decided, while she waits for the site to come back up, she’ll point people towards the cached versions.  Taaj posted this tweet on March 18.

If you look at the first pic again- it is evident that web sheriff was watching Taaj’s moves, because as soon as she mentioned viewers could still see her cached pages, they immediately went to Google again….. and tried to have the cached versions removed (also denied).   Shortly after that, they went to “The Wayback Machine” (another link that was postsed by Taaj) – which is a site that stores cached versions of websites, and they had the site excluded from that database too. 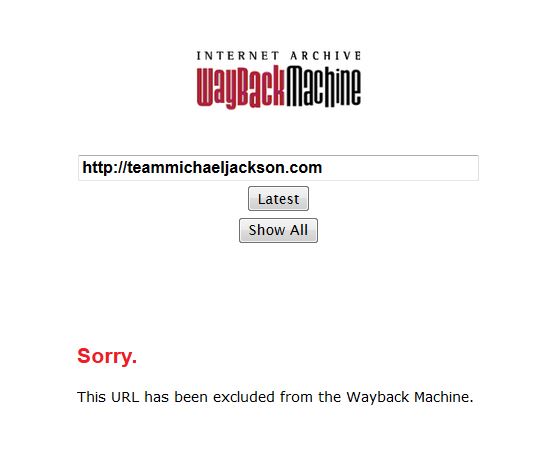 This page is being posted in order for you to see how far they are going to try to silence this website.  The links shown that they tried to remove lists pages that have nothing to do with them.   They list pages that are court transcripts.  They list pages with links to news articles on the Estate.  They even list pages to do with Web Sheriff themselves in order to hide the bullshit!   Unfortunately the harassment attempts at silencing this website is being paid for by the kids and Mrs. J in the long run.  Seriously John?  (both Johns!)  This is also a blatant violation/abuse of DMCA takedown notices or removals.  I have advised Taaj to seek legal counsel.