This fan club should change its name to “Vindicating Branca”

We make is a policy not to get involved in fan drama, but we must report facts when  pointless attacks on the Jackson family are launched in this way! Sadly instead of protecting and speaking up for Michael family, many have given way to protect John Branca who stated to Mrs Jackson “I am Michael Jackson now”

MJTruthNow, website is sending out newsletters to all its subscribers, the info contained is a direct attack on the Jackson family! the first word is “Joe Jackson!!” We all know Mr Jackson was NOT involved in the recent events, RE: Fake Will. Its obvious this is a manipulation tactic to further divide the fan base, and showing a public support for John Branca, for which he PAYS handsomely! There

You all remember the lie they printed about Janet slapping Paris, this has now been retracted!

There is  no reason to be Instigating hate towards the parents/siblings of Michael Jackson. I used to know a beautiful soul who used to be admin on this site, In our opinion the person has now left, and the demonic figures behind this newsletter ARE Theresa Hodges and Rebecca Claiborne. John Branca is throwing scrapes out to many sites.

Theresa Hodges and Rebecca Claiborne obviously want a piece of the action $$$$ recognition!! Day by day many are selling their souls to the DEVIL, “Anything for Money” we are  not saying you MUST believe the will is a fake, its up to you what you think, we post our research for you to decide, But one thing we can all agree on is, the onslaught  the media has carried out against the family is something that would literally tear Michael apart, You don’t need me to tell you how the media persecuted him his entire life, saying he bleached his skin, calling him “Wacko” yadda yadda ….

Michael Jackson fans should be the last in line to even behave the way the tabloids behaved, let alone do it to his immediate family, NO ONE knows the full dynamics of any family, let alone the Jacksons, So how can anyone, fan or advocate of Michael orchestrate such hate towards MICHAELS family,, Please take my advice, unfollow, block, unsubscribe to these tyrants that harbor nothing but HATRED!! 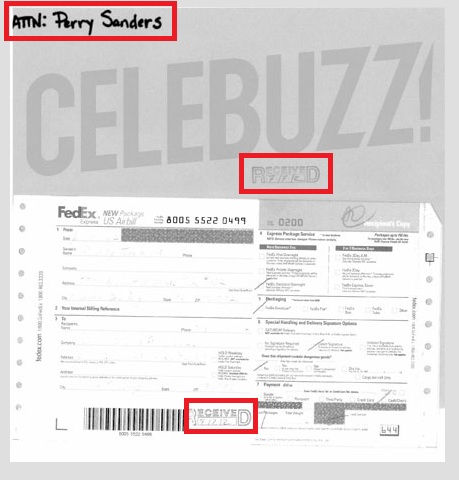 John Branca has had ample time to reply to the question put forward by the siblings, which are warranted even according to Tom Masereau. Parry Sanders leaked the letter, Brancas hired hand Trent Lied to Paris, for her to panic, all this propaganda was simply because some sons/daughters are fearful for their Mothers life, safety!! Because she IS a victim of elderly abuse!

I used to be a member of MJTruthNow, i had the deeply respect for them. Sadly MJTruth is the furthest from the truth in any shape and form, because Michael would never approve of the sensationalism that is coming from this site!

The siblings  repeated themselves over and over, its NOT about the money, its about Justice for their BROTHER! Its about protecting their Mother and Michaels babies! If the Executors ARE removed(which they can be for fraud) the estate will go to Michaels children! Mrs Jackson will be left out, ALL THE SIBLINGS will be left out, ONLY MICHAEL CHILDREN WILL BE BENEFICIARY!

Which Executor would bar a wife from seeing her husband, would bar a Grandmother from seeing her grand children, From seeing ones SHE gave birth to! No its not to protect her or Michaels children from harm, please dont buy the BS, its to isolate her from the exact ones who are trying to protect her!! Remember how Michael was isolated then murdered….  HOW CAN WE EVER FORGET THAT DREADED DAY!

Mrs Jackson repeatedly said, she did NOT want TJ to take guardianship, doesn’t it make you wonder why/how she changed her mind,, FEAR OF DEATH, why would her attorney Perry Sanders mention the word “Death”

to this already frightened lady, look up elderly abuse on google, key words are used to control Mrs Jacksons, this is elderly abuse! John Branca can be removed in a heart beat for what he is doing to Mrs Jackson! Wonder why he is keeping her isolated now! Stop wondering, see the facts!

You can read the evidence on John Brancas dirty dealing here, provided with evidence that CAN NOT  be refuted, please take the time to read, its over 70 pages,, read it!

This is the letter sent out by MJTruthNow, in bold we will refute the misinformation!

Joe Jackson’s progeny (Rebbie, Jermaine, Tito, Jackie, Randy and Janet), hereafter referred to as the Unbequeathed Jackson Siblings, believe Michael Jackson’s Will is invalid. They don’t trust the Executors of Michael’s Estate, even though John Branca and John McClain were approved almost three years ago by the Los Angeles County Probate Court. (Approved on a lie, they submitted resignation letter from Seigel, but withheld facts that they were fired for Embezzlement, demanded to resign, hand over ALL document, should NOT have been in possession of the Will, even if JB was rehired, he was NOT reinstated as Ex)

The Unbequeathed Jackson Siblings must think Probate Court Judge Michael Beckloff is a buffoon or, at the very least, unqualified or gullible. The Unbequeathed Jackson Siblings continue to say Michael’s 2002 Will is “fake,” as Michael could not have signed it in Los Angeles because it can be proven he was in New York on that day. (Michael was in NYC)

Here are some facts regarding The Last Will and Testament of Michael Jackson.

Michael’s intent in his two Wills and the corresponding Trust is very clear. His assets are to be preserved for the benefit of his mother, children and charities yet to be named.

Some fans believe the Unbequeathed Jackson Siblings have valid concerns about the validity of Michael’s Will and it would be careless of them not to get to the bottom of it. (These are NOT Michael wishes, but John Branca, will is fake, this point is moot)

Careless? Why? Michael’s father and siblings are just that: Michael’s father and siblings. They were emancipated from each other–literally and figuratively–when they all reached the age of majority and/or when Michael left The Jacksons. Michael’s Estate is as much their business as it is the fans’ business–which is NONE. This isn’t just the practical reality of the situation. It’s the law. Michael’s Executors have been working on retiring leveraged business debt against the assets of Michael’s Estate. Their efforts are earning large amounts of money for the only legatees who matter: Katherine, Prince, Paris and Blanket Jackson. (If its not the fans business, then why this attack, i smell hypocrisy) (Injustice anywhere is a threat to justice everywhere. Martin Luther King Jr)

The Unbequeathed Jackson Siblings are having a hard time accepting this but surely Michael’s fans ought to comprehend. Why don’t they?

Instead, they’re spinning their wheels and racking up legal fees they will probably never pay. Both the civil court and the probate court will tell them to go pound sand. If Michael’s Estate was being MISMANAGED, well, we could see why they might be upset, but just the opposite is occurring. Faced with nearly $500 million in leveraged business debt against Michael’s assets, the Estate of Michael Jackson is making large amounts of money and is nearly debt free. Michael’s financial situation is healthy and his musical presence once again robust. (Ermmm what debt, John Branca himself stated that was SPECULATION, When one lies, its hard to remember what to say, because the first was a lie) 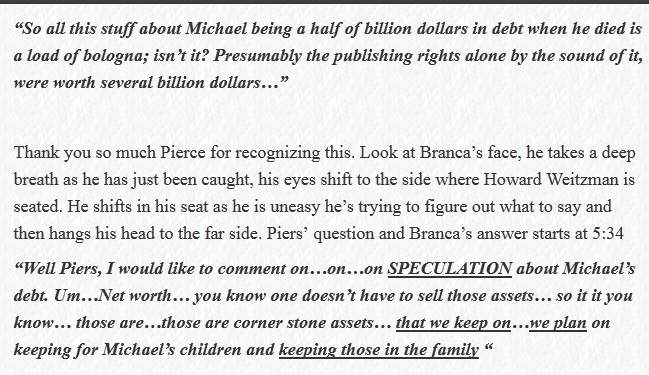 Furthermore it was reported Estate made ONE BILLION on first anniversary of Michaels passing.. See the break down, which can not be denied, box office sales, record sales etc are easily gathered by such companies,,

Business activities of the Michael Jackson Estate consist of:

So what are the Unbequeathed Jackson Siblings complaining about? That’s easy. They weren’t named in the Will–in any capacity–and they’re hoppin’ mad about it. Rage and resentment can result in strange behavior in even the most loving families. (only ones i see hopping mad are TeamBranca who insult attack anyone who does not agree with their view)

Meanwhile, a full accounting of the activities of the Estate of Michael Jackson should assure Michael’s fans that his musical and personal legacy are being well cared for.

Second accounting of the Estate of Michael Jackson

As to whether the Executors earn too much, well, what about other agents of delebs (dead celebrities)? Here’s how deleb agents roll. Why should Michael’s Executors/Agents be any different?  (Thank you for the link below, You should have read it “seems to me more like a money grab for a few business managers living a dream and the dead have no say.” Exactly, Michael was a human, NOT a commodity, the authors motives are so obvious $$$$)

(Lols Steve Kroft is NOT an Estate Ex, he works for EE’s more careless misinformation!! Also this link confirms Heirs should have a say in how MJ’s image name is used which is clearly not being reciprocated by Es Ex. further evidence Branca has no regard for law in place!! Really this video is irrelevant to the comment made, more distractions)