More and more news articles are being removed from the net, or are being “Updated” with reference to John Branca, McClain and Weitzman being removed, I suppose this is where Michaels $$$ are going instead of to charity, over three years has passed and still 20% Michael left for charity has not been fulfilled,,,

The article was probably removed as Branca wants to hide the fact HE protected AEG from onset, would not give the AEG Contract to Mrs Jackson unless she signed a confidentiality agreement, in other words, WOULD NOT SUE AEG!! 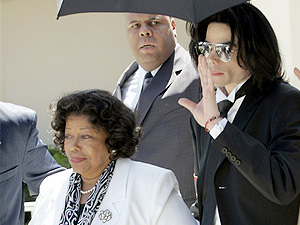 Michael Jackson’s mother gained permanent custody of her late son’s children during a hearing Monday that included a surprise objection from the King of Pop’s former dermatologist.

Los Angeles Superior Court Judge Mitchell Beckloff made a series of key rulings during the morning portion of Monday’s hearing.

In addition to approving Katherine Jackson’s guardianship petition, he also granted monthly stipends to the 79-year-old and the three young grandchildren she is now charged with raising.

The ruling came after an attorney for Beverly Hills Dr. Arnold Klein, Michael Jackson’s longtime dermatologist, raised nonspecific objections to the custody arrangements. The attorney, Mark Vincent Kaplan, said they were based on the doctor’s long-term relationship with the singer and his children.

“Legally, he is not a presumed parent,” Kaplan said. He said Klein had concerns about the children’s education and other day-to-day parenting issues.

Beckloff determined Klein didn’t have legal standing to object to the care of Jackson’s children, but said he could raise objections later. Klein has repeatedly denied tabloid reports that he is the biological father of Jackson’s children, saying last month on “Larry King Live” that “to the best of my knowledge” he is not.

Diane Goodman, an attorney for Katherine Jackson, told Beckloff that Jackson’s youngest son, Prince Michael II, was born through a surrogate who has no parental rights.

Katherine Jackson’s approval as permanent guardian is in accordance with her son’s wishes, who named her in a 2002 will as the person he wanted to raise his children. Beckloff noted that the singer’s two oldest children, 12-year-old Prince Michael and 11-year-old Paris Michael, filed declarations stating their wishes for who would raise them. He did not indicate what they said.

Katherine Jackson’s lawyers filed a petition last week accusing the men who now control the estate of being “intent on keeping her in the dark” about deals they’ve made or are negotiating.

Howard Weitzman, one of the lawyers for Branca and McClain, said they’ve provided “timely information to Mrs. Jackson’s counsel regarding potential business opportunities for the Estate.”

“Any inference that we have not been forthcoming in providing information to Katherine Jackson’s attorneys is not accurate,” Weitzman said.

Katherine Jackson is asking the judge to order Branca, McClain and others to answer questions under oath about their business agreements to determine whether they are “fit and able” to administer the estate. The men also were served with a 19-page demand for documents.

Branca has refused to let Katherine Jackson see Michael Jackson’s contracts with AEG – the company that was organizing and promoting his planned concerts – unless she agrees to keep them confidential. Branca’s lawyer argued in a court filing that he has no choice, since the contracts have a provision requiring confidentiality.

“There is one agreement being requested by Mrs. Jackson’s attorneys where the other party to the contract has agreed to provide the document to Mrs. Jackson and her attorneys but requested that the terms be kept confidential and not be shared with third parties,” Branca’s lawyer said. “Mrs. Jackson’s lawyers have refused that offer.”

Branca’s lawyers also argued that Jackson’s demand for documents was too broad and burdensome.

“Such measures will not be necessary if Mrs. Jackson is appointed a co-executor of the estate,” McMillan said.

McMillan, in an interview with CBS Thursday, estimated the Jackson estate was worth $2 billion, while the executors have estimated in court that its value is around $500 million.

The will written in 2002 places all of Michael Jackson’s assets into a family trust benefiting his mother, his three children and unnamed charities.

Judge Beckloff will consider at Monday’s hearing who will have permanent control of the estate.

A legal battle over Michael Jackson’s estate is looming after his family lawyer, L. Londell McMillan, said they could not locate his will.

By Paul Thompson in Los Angeles

The custody of his three children could be affected if he died intestate and his assets could become the subject of bitter wrangling.

Jackson is thought have had debts of more than £240 million but he retained a half share of the Beatles music catalogue which is said to be worth as much as £600 million.

Much of his debts could be wiped out by sales of his records soaring worldwide and there is talk of a DVD of his rehearsals for his London concerts being released.

Jackson family lawyer L. Londell McMillan said there were “reports of [a will] but none has been presented to the family at this time.”

He has been charged with looking after the Jackson family as various camps form to what could be custody battles for his children Paris, Prince and Prince Michael.

Catherine Jackson, the star’s mother, has filed for guardianship of his three children.

Debbie Rowe, the biological mother of Jackson’s two oldest children, has yet to make any statement on what her plans are.

Rowe sued Jackson in 2006 over custody arrangements but settled out of court after winning an appeals court verdict.

The mother of Prince Michael has never been identified, but it is thought unlikely she will have any claim to the young boy.

Any will would be expected to include details of who should take custody of his children in event of his death.

Legal experts in Los Angeles said if Jackson had appointed an executor of his estate they have 30 days to come forward to an petition a court to serve as executor.

Jackson is thought to have grossed over £1 billion in his 40 year career – but his profligate spending left him with little when he died.

Legal experts said determining how the estate is divided up could take months, and even years if legal battles are waged by interested parties.

“This is going to be a major headache. These are matters that could take years and years to settle,” said Stephen J Silverman, an estate planning lawyer based in New York. He said arguments over the estate of the guitarist Jimi Hendrix lasted until 2005, more than 20 years after his death.

Jackson’s estate will also be subject to federal inheritance tax of up to 45 per cent. How much he pays depends on the extent of the trust arrangements he made to keep the money out of the hands of the US Government.

As Jackson was a resident of California his estate could be subject to millions of dollars in state probate fees, which are assessed on the value of the estate before debt.