ARE JULIENS AUCTIONS KNOWINGLY SELLING STOLEN GOODS??? Enter at your own risk!

WE URGE ALL FANS TO EMAIL JOHN BRANCA AS HE IS THE ONE WHO SHOULD BE PUTTING A HALT TO THIS AUCTION, NOT AIDING AND BETTING!!!!!  Tel 310-552-3388 johnb@ziffrenlaw.com 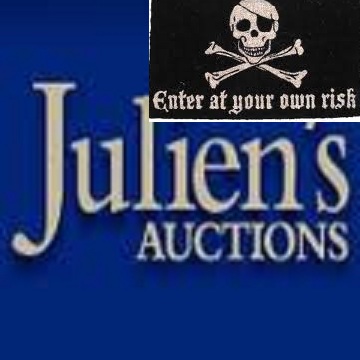 Here is part of the auction catalog from April 2009. Settlement was reached between the two parties, Darren Julien was NOT to auction off any of these items,,, He may exhibit them ONLY!!

A scheduled auction of the pop singer’s possessions was called off Tuesday after Jackson and Julien’s Auction House reached a settlement to their dispute over whether 2,000 items from Neverland Ranch were ever intended for sale.

Specific terms were not disclosed. But in short, Jackson keeps his things, while Julien’s keeps its exhibition, which was open to the public and originally meant to promote next week’s sale. More…..

These Items are being auctioned off on December 2nd 2012. Two of the JACETS below ARE duplicates.

THIS JACKET IS NOT THE ONE WORN IN LA GEAR POSTER, THIS WAS IN THE AUCTION MICHAEL HAD CANCELED IN 09. THE IMAGE OF LA GER POSTER IS MISLEADING BIDDER!! 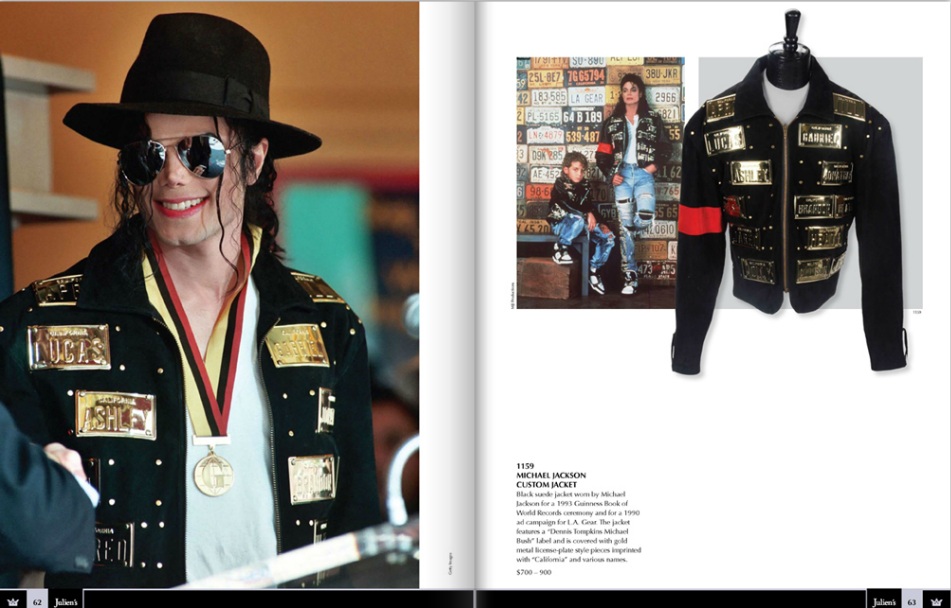 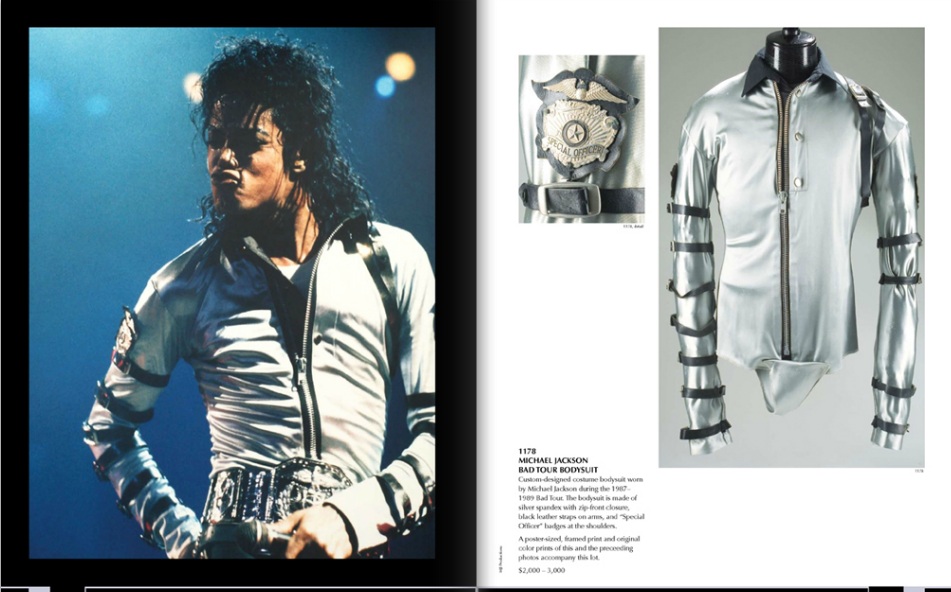 THIS JACKET IS NOT THE ONE WORN IN VANITY FAIR PHOTO SHOOT, DARREN HAS MISLEAD THE BIDDERS IN THE 09 AUCTION CATALOG BY ATTACHING THE SMALLER IMAGE(MICHAEL LOOKING IN THE MIRROR)  WHICH HAS RED ON COLLAR, SHOULDER AND CUFFS. 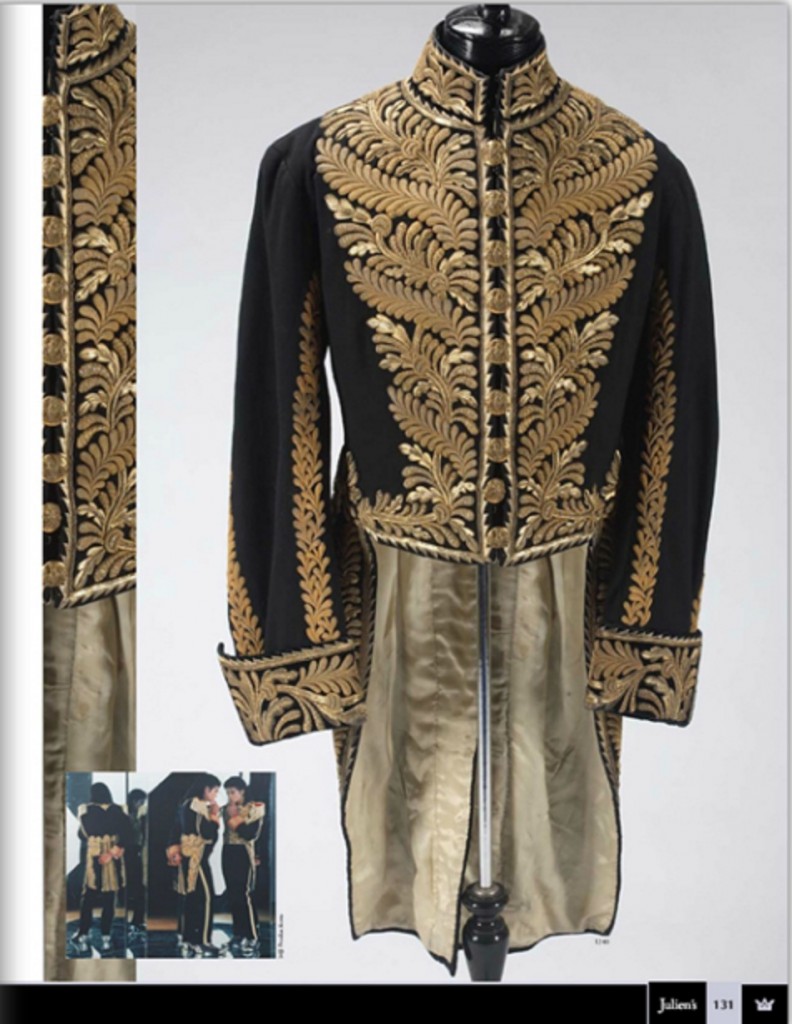 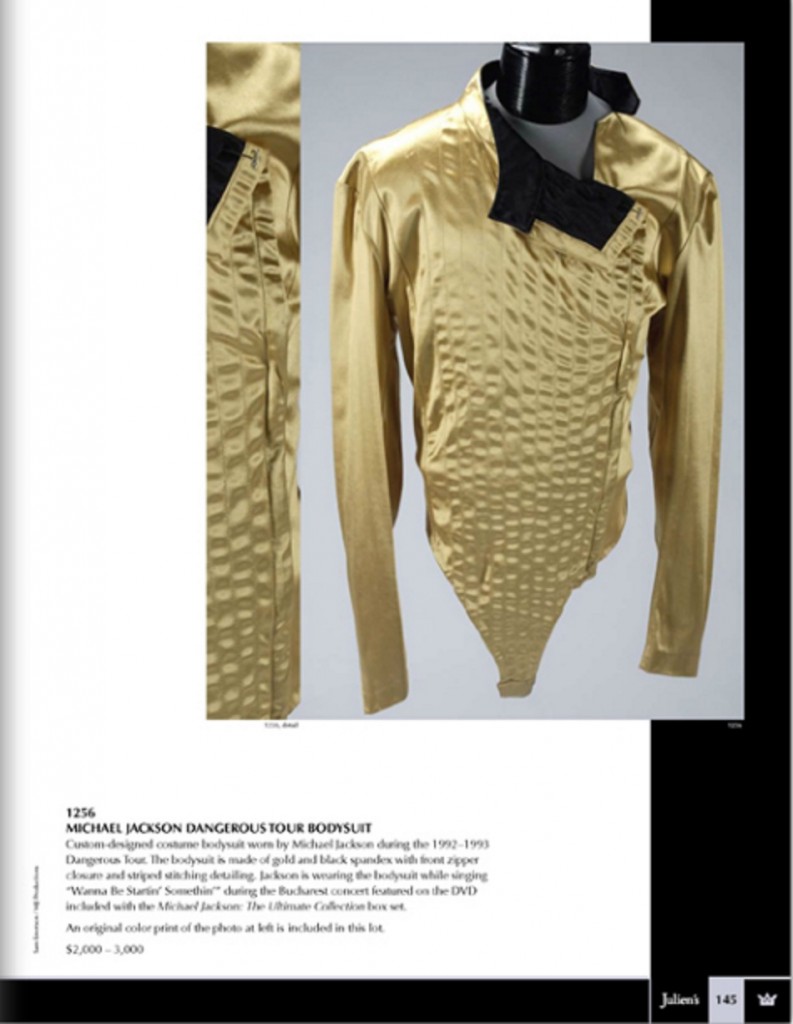 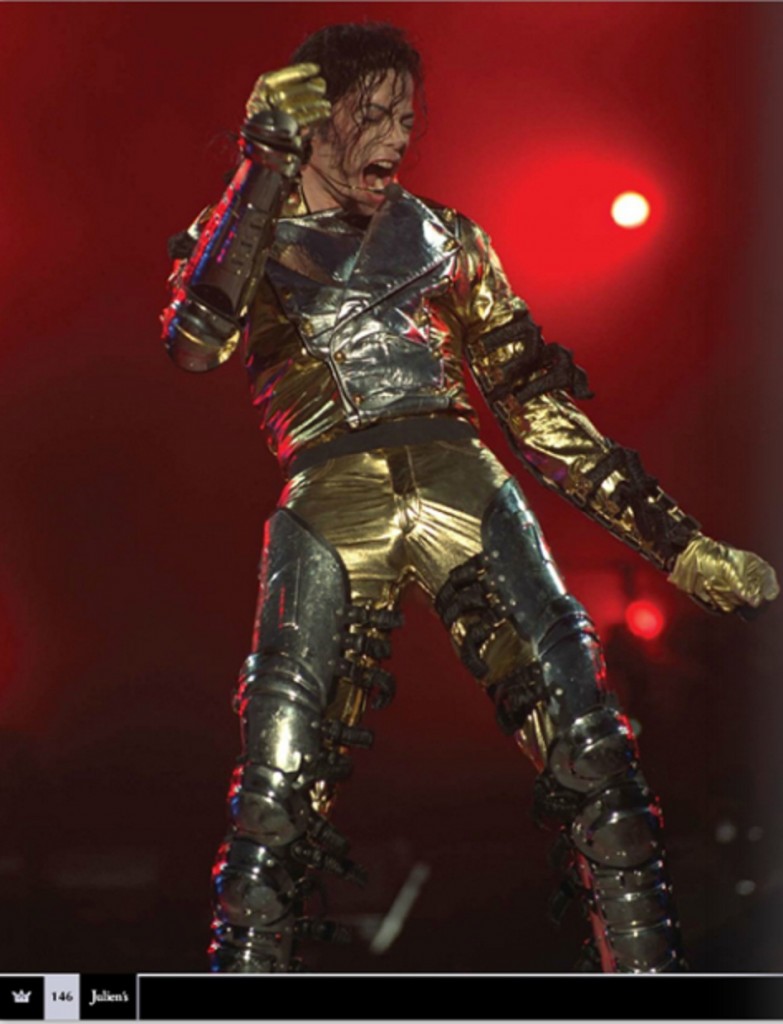 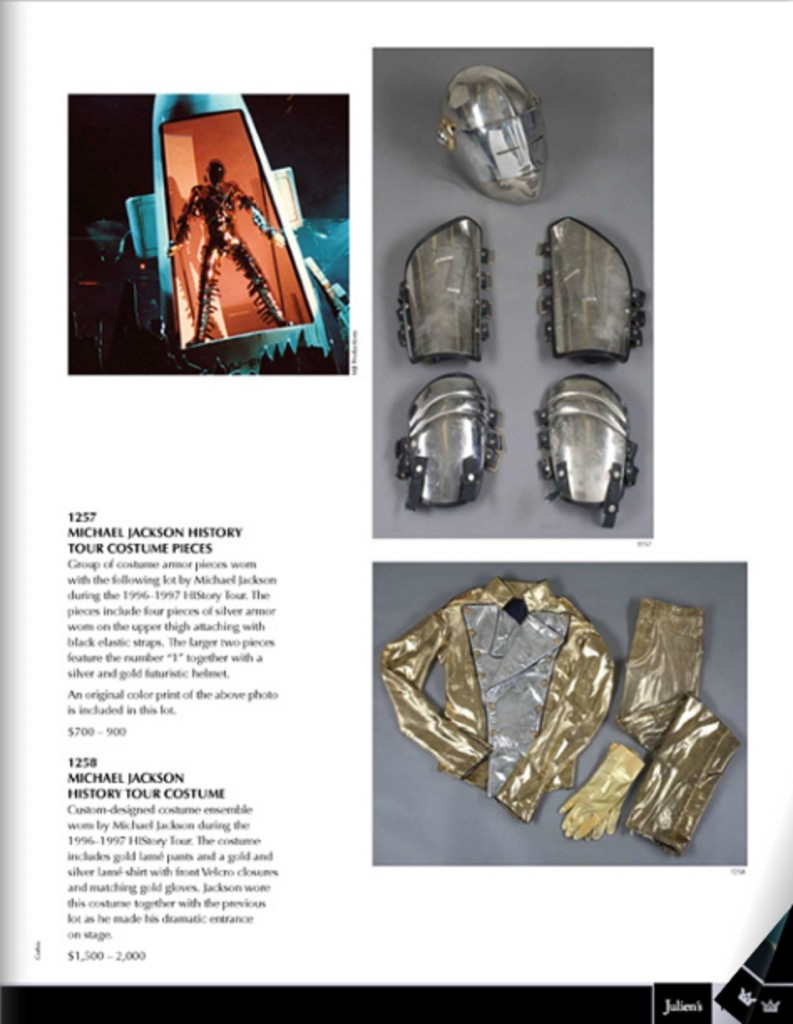 Here you can see identical costumes being auctioned off Dec 2nd ,,,,,,, 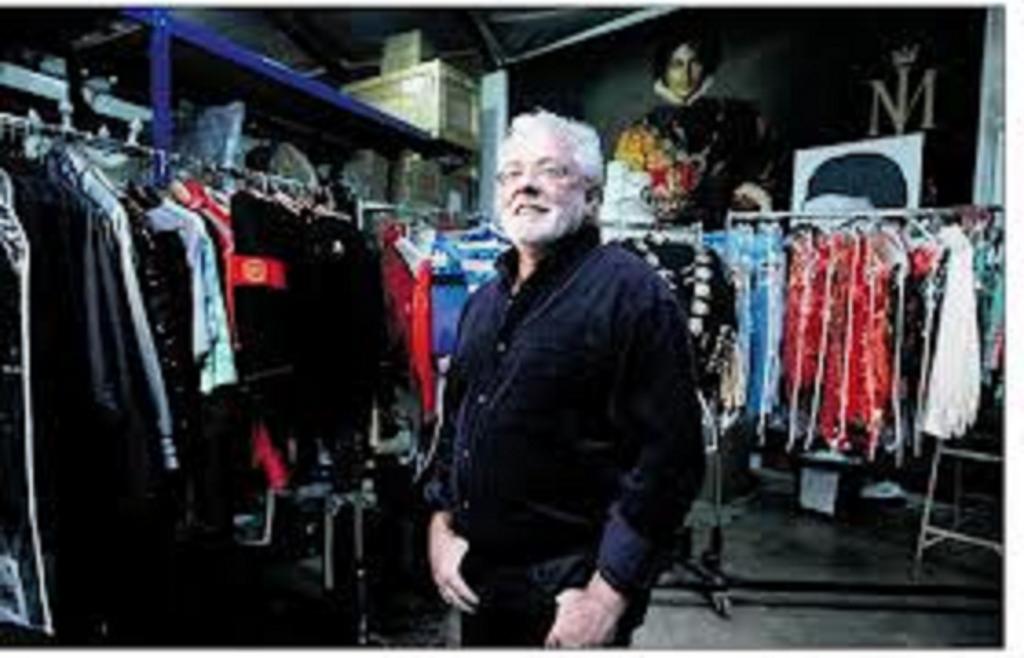 Image of Bush has a huge banner of Michael behind him

This banner I have personally seen at Rocking Boxes in Santa Clarita, I traveled there to pick up a consignment for a fan, as once wining an auction at Juliens, Juliens forced her to use Rocking Boxes for shipping, RB were charging her in excess of $900.00 so she asked me to collect the items, I did and shipped them to her via FedEx for $80.00 plus insurance(that’s another blog in itself should be labeled EXTORTION. The fan was not told about shipping cost unless she paid for  her item first, then she was sent shipping cost,  if shipping was not paid for within 60days,she would have lost her auction winnings) insert image

So this image and location is Rocking Boxes, It seems Julien stored Michael’s belonging here and Bush seems to be going through those items for his book, If indeed Michael gave ALL these items to Bush they would be under his bed, as he claimed to some fans on facebook, the jackets seem well stored in plastic on racks, not something Bush would fit under his bed…..

Any reputable auction house would check with owner of items, negotiating with Tohme Tohme 2008 when Tohme Tohme claimed Neverland had to be cleaned out because Colony Capital had purchased the note on the property, Claiming he was board member of CC, this sounds like conflict of interest.

As you can see from Darren’s declaration exhibits attached, there are many emails from Darren but none were replied to, what would it have taken Darren to contact Michael Jackson direct….

July 26th 2008 Consignment agreement was sent  by Darren but was not signed, you would think then Darren would contact Mr Jackson???

Tohme Tohme was a man Michael feared, TT made declared death and destruction on Michael, and The Jackson family

In the past Lisa Maria complained about Julien selling her private letter which was then removed from auction by Darren.. Source…..

In the past suspect items have been sold, we protested to Darren April 2010 when he planned an auction on the day Michael was murdered June 25 2010, but Darren claimed he could not disclose who the sellers were, he has held NINE auctions of Michaels personal effects and got away with it!  but in this instance we know these are supposedly owned by Bush. But Darren is fully aware this is not true, once those items were in Darrens care for the exhibition Michael was Murdered so its not possible he scribbled all over them and handed them to Bush!

Of course Julien may be able to go back to the estate and obtain the correct paperwork, Showing he has rights to these costumes, but as it stands now the Estate are claiming the items belong to Bush, we have posted their statement on our site. And if this does happen its further evident of shady dealings by Darren Julien….

Bush has costumes with scribbling all over them, saying Michael inscribed to HIM. Michael the perfectionist he was would NEVER write across his bad costume or any other garment, the thriller jacket Tompkins auctioned of last year we accept as the man was very sick, that jacket was signed by Michael, inside where it could not be seen

But wait they are owned by Michael,, We have posted enough evidence to prove this.  John Branca the Estate Executor has allowed Juliens/Bush to use Michael image and likeness for the purpose of the auction and exhibitions, I wonder if they are paying for that privilege, or is it going on Mrs Jackson, Prince, Paris and Blankets tab without them knowing!!

John Branca who sued Mrs Jackson for sharing her memories/feeling after losing her son, is offering freebees to these guys???  hmmmmm

Anyone bidding would be advised to seek legal advice, if these items are reported missing at a later date they will be confiscated causing loss of thousands of dollars to winning bidder..

Julien$ and Bu$h are in on this together… Julien$ desperately wanted to $ell Michael’s co$tume$$$. So they found a front man…. Greedy Bu$h loveS Money$$$  no respect/loyalty for Michael Jackson!! The “Book” is all Darren Julien$ idea in our opinion!!

Dressingmichaeljackson.com is owned and operated by Pop Regalia, LLC on behalf of Michael Bush. About the Book · Michael Bush Bio · Pre-order The King of …
POP REGALIA, LLC owns and operates the Book/Exhibition site that also promotes the Auction.  Well, Pop Regalia, LLC’s address is listed as the same as Julien’s. Their mailing address is Julien’s.
MORE PROOF THAT MICHAEL JACKSON’S PERSONAL BELONGINGS (COSTUMES) HAVE BEEN AT JULIEN’S A LONG, LONG TIME. Not under Michael Bush’s bed as he claimed to fans on facebook
HERE IS ONE OF THE COSTUMES OF THE TOMPKINS/BUSH EXHIBITION/AUCTION TAKEN IN FRONT OF THE ARMOIRE (MIRROR) WITH WRITTEN WORDS BY MICHAEL AS FOLLOWS:  “Train, Perfection March April Full Out May” ( Lot #162, Page 64 ) SOLD AT THE JULIEN’S AUCTION OF 100 N. CAROLWOOD DRIVE, DECEMBER 17, 2011!!! 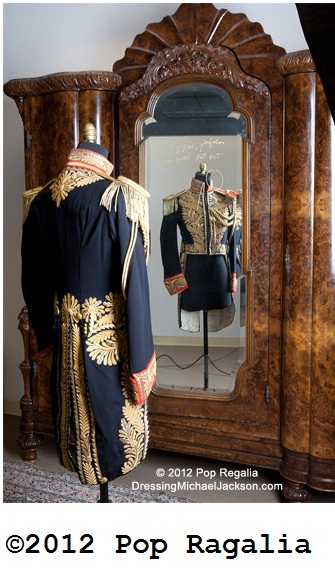 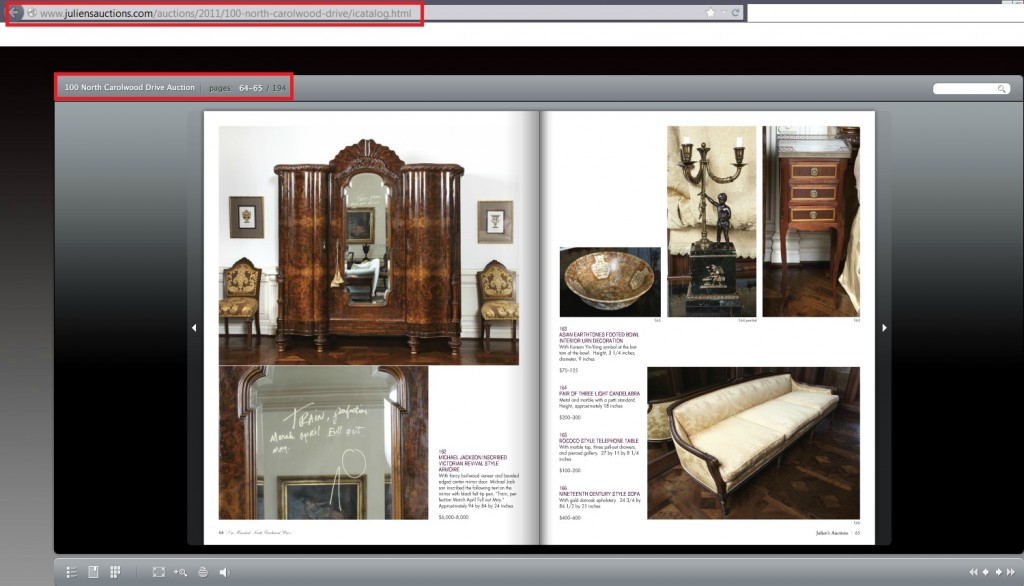 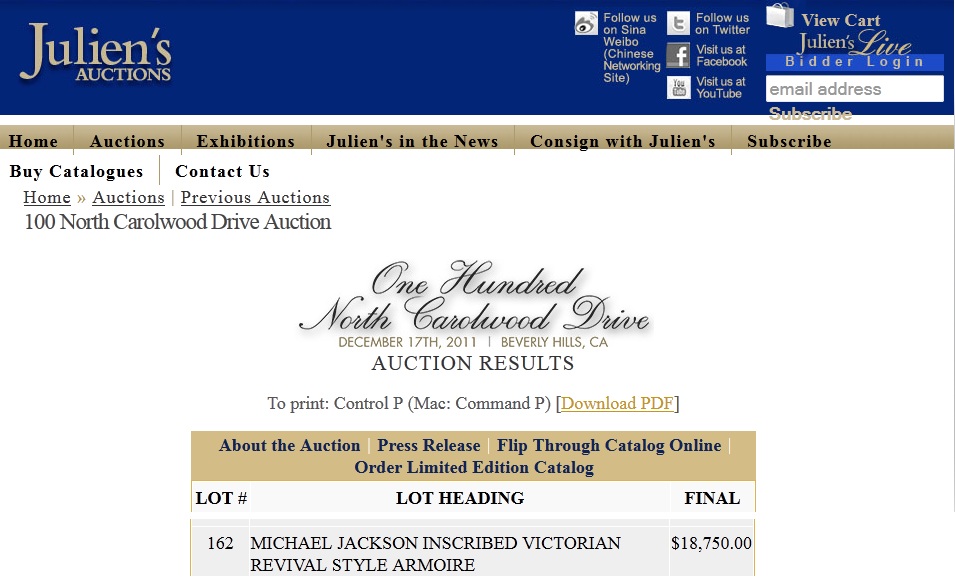 READ MORE…….. They are all in on this together- John Branca-Juliens Auction- Michael Bush | http://www.teammichaeljackson.com/archives/6654

Please look to the left at numerous other blogs on Juliens, Bush and Branca, tweets from Make up artist who witnessed some costumes were given to Bush for safe keeping, for a museum..

Michael Bush has caused a blizzard on this tour he has been doing in Europe forcing fans to buy his book, we have post blogs, more can be see here at how a 4 year old was treated, mother left crying because she did not want to pay entrance fee, photograph fee, book buying fee..

Some comments from Rome, was same in UK, Paris, Rome, etc, etc, too many comments to post,,so many Bush deleted, few here

still got no real answer to my question…
This entry was posted in Blog. Bookmark the permalink.