PLEASE SCROLL TO THE END FOR MORE PROFESSIONAL OPINIONS!! 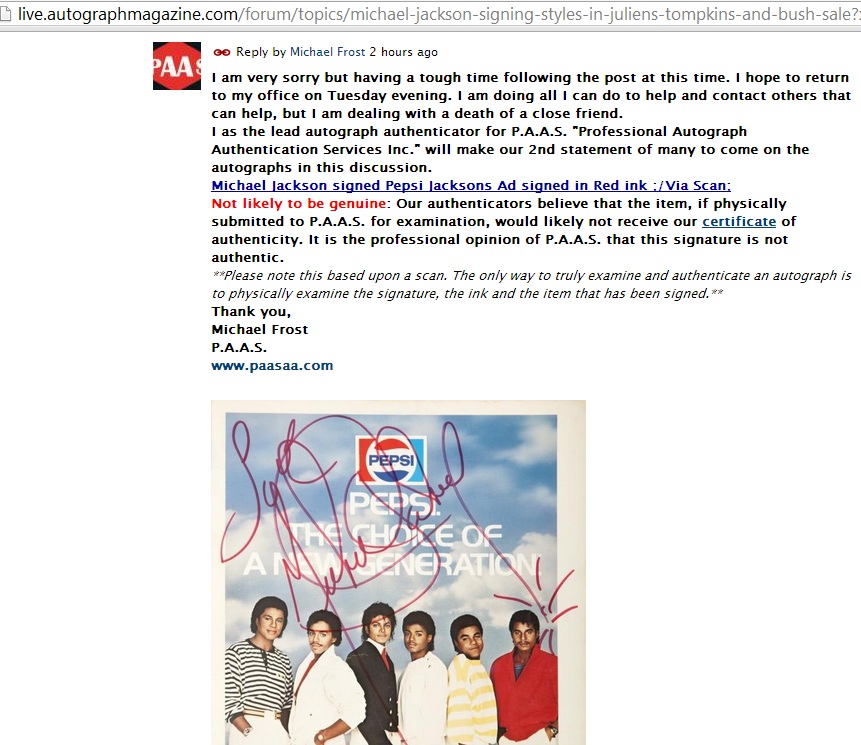 WE BELIEVE THAT JULIEN’S AUCTIONS AND MICHAEL BUSH HAVE INTENTIONALLY COMMITTED FRAUD AND FORGERY UPON ALL OF US!

We have tried to reason with Mr Bush, who in turn had Michael Jackson Fans banned from the Exhibition, We have had PROFESSIONAL contact Darren Julien who in turn has stated all the signatures, personal letters posted in OUR discussion are fakes, Darren is telling us, WE HAVE FAKES, when in fact the people who posted them witness Michael sign to them!! We have posted video in the discussion to show Michael sign his autograph and posted it, we have posted Michael passport, and numerous legal documents, BUT DARREN JULIENS REPLY IS HE has a video of Michael inscribing the hundreds of items they are selling, but has not presented this to the discussion, Darren Julien was invited to take part in our discussion but he did not!! THERE IS NO REASONING WITH THOSE THAT ONLY SEE THE DOLLAR SIGN, WE HAVE HAD ENOUGH, WE DO NOT HAVE TIME FOR SMOKE SCREENS, ITS TIME TO ACT, AND ACT NOW!!!

WE NEED TO TAKE ACTION NOW!!

If you believe this as well, please start reporting this IMMEDIATELY as FRAUD to California Consumer Protection Agencies – FBI-LAPD. SAMPLE LETTER HERE COPY&PASTE http://www.twitlonger.com/show/k4t8q2 THE ANALYSIS PROVIDED HERE ARE BY @wendyluvsmj

Complaint:  It is our belief that Julien’s Auctions located at 9665 Wilshire Boulevard, Suite 150, Beverly Hills, California 90210 (Telephone: (310) 836-1818) AND Michael Bush have intentionally committed fraud and forgery upon all so us by falsely and intentionally misrepresenting, portraying, advertising, charging for, and the auctioning of numerous Michael Jackson memorabilia with fake, falsified, counterfeit, and fraudulent Michael Jackson signatures.

“Anyone in the field of appraising and/or selling signatures would NOT be blindsided or bamboozled by this obvious manifestation of forgery by the Hundreds!”

What is “Forgery” under California Law?

In California , forgery is a type of fraud that is considered both a “white collar” crime and a theft crime. Although most people think of forgery as simply “signing someone else’s name”, the offense of forgery is actually much more comprehensive.

Forgery occurs when you intend to commit a fraud and:

Counterfeit or recreate the seal or handwriting of another without prior approval,

Alter, corrupt, or falsify specific legal written documents, such as a will or court record, and/or

Any document or item relating to money, stocks, a sale, transfer, or exchange of goods or property,

Any written document relating to how one intends to dispose of his/her property upon death,

A legal document other than a will or court record (a power of attorney, for example), or

Just to clarify, the words “utter and publish” mean the same thing. They mean to use or attempt to use an instrument or document either to (1) assert that it is genuine, or (2) represent to someone else that it is genuine.

California forgery law only applies to acts that prejudice, damage, or defraud another out of:

Money, an interest in property, and/or other legal rights.

If you believe this as well, please immediately start reporting this as FRAUD to these California Consumer Protection Agencies: PLEASE MAKE IT CLEAR WHEN REPORTING, AUCTION IS DUE TO TAKE PLACE DECEMBER 2ND, 2012

You can send fax from your computer for free from http://faxzero.com/

Please look here at professional analysis and discussions to refer to the authorities http://live.autographmagazine.com/forum/topics/michael-jackson-signing-styles-in-juliens-tompkins-and-bush-sale?id=3524372%3ATopic%3A308435&page=1#comments

It seems items sold by Juliens in the past are questionable, we will be researching those items in the coming weeks and will post them under the tab “Juliens auction” at the top of these pages 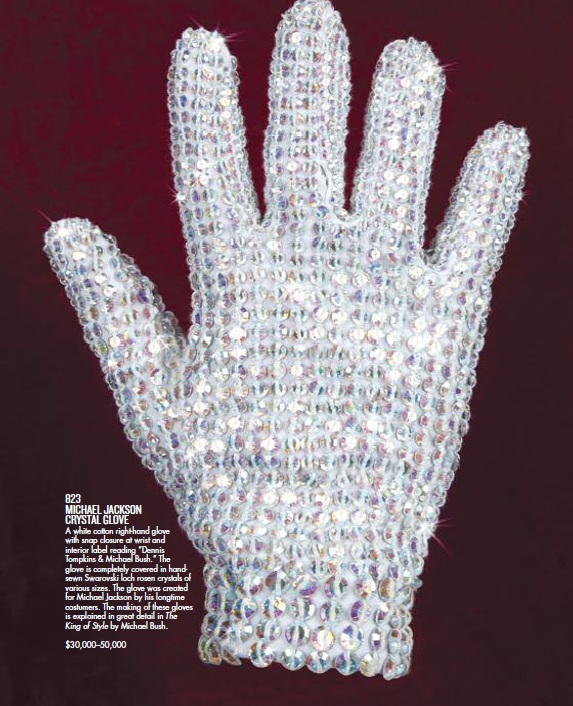 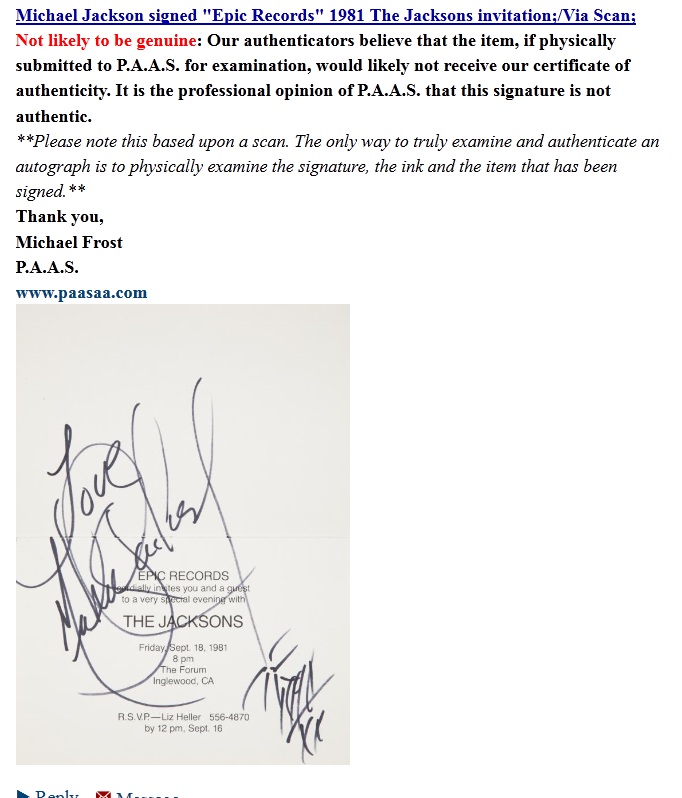 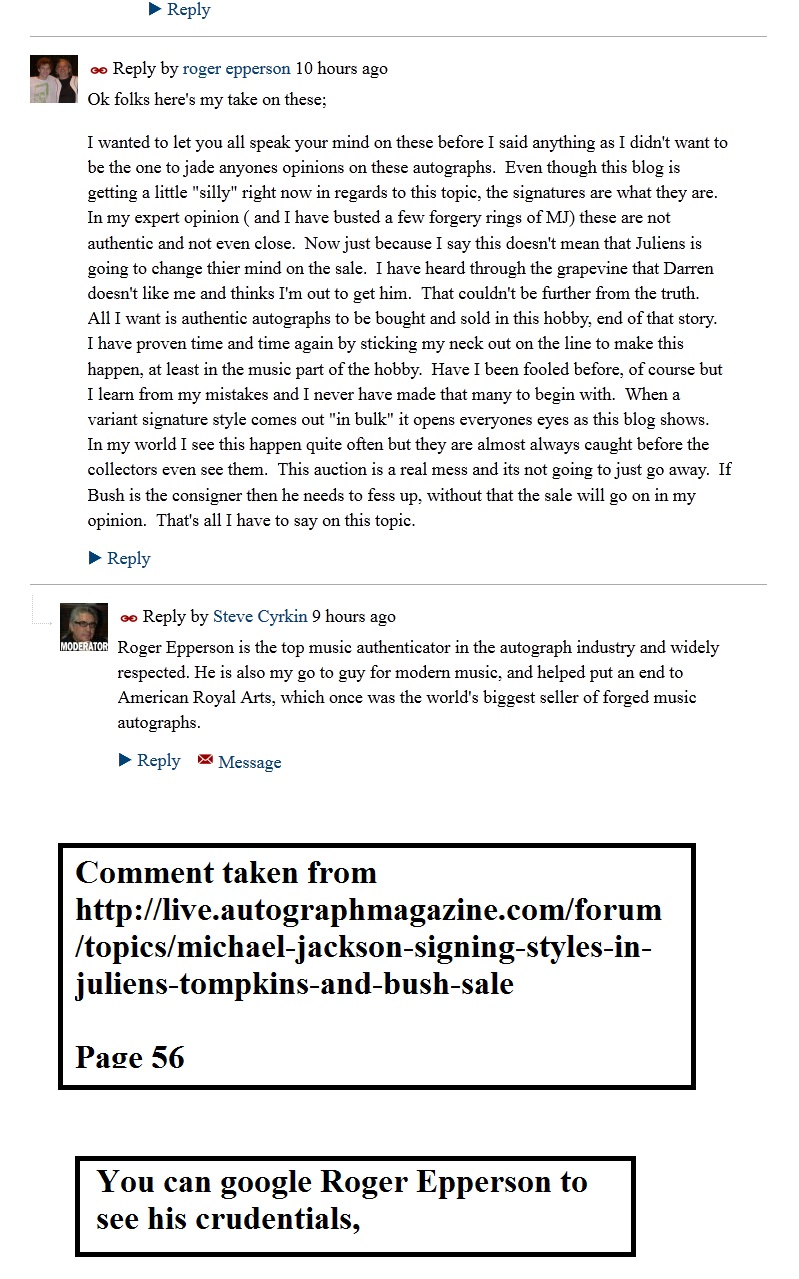 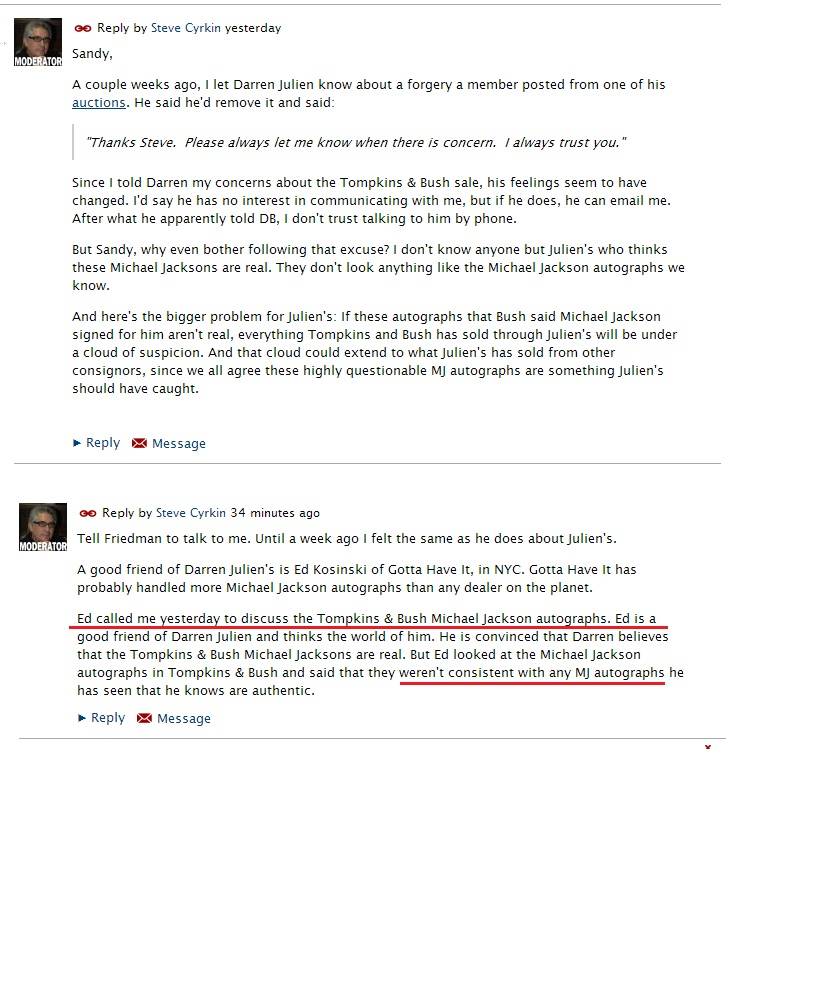 Career Experience
Owner and authenticator for the web site www.signedsealeddel.com
One of the world’s only autograph dealers that only deals exclusively in music industry autographs. Signed, Sealed & Delivered Autograph Memorabilia has been in business for more than 20 years. The company started out as a mail order business by printing and mailing a quarterly catalog. It has now matured to a 24/7 online store.

Owner and authenticator for REAL Roger Epperson Authentication Limited
REAL was started over five years ago to help individuals and businesses know that the autographs they own or are selling are in fact authentic. Once inspected, either a letter of autograph authenticity or a letter of rejection is issued. I also have a “quick opinion” service in order to help those who are buying autographs from an on line auction to confirm quickly if the autograph is likely authentic or not.

Owner and writer for www.autographalerttruth.com
Autograph Alert Truth is an online column / blog for the education of the autograph collector. It has been up and running since 2009 with nearly 2500 visitors a month.

PSA/DNA
I was the full time music autograph authenticator for PSA/DNA, the nation’s largest authentication service from May 2004-November 2006.

Auction Houses that I authenticate for

RR Auction
I have been their music autograph authenticator for over 8 years. I am considered by them as an expert in the field of music autographs. RR Auction puts out a monthly catalog in which I look at 100 or more autographs a month.

American Memorabilia
I have authenticated for them for nearly 5 years. I am paid on a per item bases. I am considered by them an expert in the field of music autographs.

Heritage Auctions
I have authenticated for them for over 4 years. Heritage Auctions hold 4 auctions per year in entertainment memorabilia. I am considered by them as an expert in my field.

Media, TV and radio shows
History Detectives
On Tuesday July 17, PBS aired the 10th season premier of History Detectives.  On this episode Roger Epperson was featured reviewing and providing his professional services regarding Beatles autographs (and others). Click here to watch the episode online.

93.7 The Arrow
I had a quarterly radio show where people would call up and tell me what they had and I would evaluate it on the air. I am considered by them to be an expert in the field of music autographs.

107.5 Classic Hits
I have a quarterly radio show where listeners call in for an evaluation on their autographed items. I am considered by them to be an expert in the field of music autographs.

Autograph Magazine
I have been a frequent writer for this magazine which is the only magazine serving the autograph community. I have been writing for them for 5 years. I have written many articles showing the examples of many famous musicians’ autographs. I have also done full studies of individual artist’s autographs over the years. These musicians include Elvis Presley (a two part story), Stevie Ray Vaughan and Led Zeppelin. I am also asked for my opinion on any music autograph stories they do which show autograph exemplars. I am considered by them to be an expert in the field of music.

Education
– Roger Epperson studied with many of the best in the business learning how to detect pen pressure, ink flow, letter formation, and alteration of documents and the history of writing instruments.
– I was an “in person” collector of autographs for over 20 years. I have built the world’s largest data base of autograph exemplars in the music field.

PSA/DNA- With over 19 million collectibles certified and valued, over $1 billion, PSA represents the industry http://www.psacard.com/

President and head authenticator for Professional Autograph Authentication Services . President of Collectables of the Stars Inc. established in New York in 1982.One of America’s earliest autograph store. Michael Frost was the first to have Mickey Mantle, Joe DiMaggio, Willie Mays and Duke Snider for in-store signings. Michael Frost formed a very close friendship with Mickey Mantle, Muhammad Ali and many other superstars during the 1980’s and 1990’s. Michael Frost worked as a marketing agent and manager for many superstars in sports. He later partnered with Michael Wehrmann to offer the 1st true witnessed private signings and appearances in the entertainment industry. Working directly with Little Richard, Ronnie Spector, Carmen Electra, the cast of Diff’rent Strokes and many other stars of music and screen. Michael Frost is a co-founder and past President of the International Autograph Collectors Club & Dealer Alliance The IADA-CC. The first President of the Gold Coast Autograph Club, and recipient of the UACC Certificate of Appreciation Award (1991).

Michael Frost has obtained over 45,000 autographs in person and has authenticated over 10,000 autographs. Michael is a true pioneer in the autograph hobby and autograph authentication industry. He has worked hand and hand with 100’s of athletes and celebrities with private signings and personal appearances.

Michael Frost has over 35 years experience in the autograph industry and is one of the few universally respected authorities. He has worked with and authenticated for some of the biggest sports memorabilia companies and auction houses in the world. Michael has also worked endless hours directly with eBay’s forgery and fraud department.

Founded in 1994, GOTTA HAVE IT® Collectibles, Inc. is the premier resource for the highest quality collectibles and memorabilia. Since its inception, GOTTA HAVE IT!® has been internationally recognized as the ultimate destination for fully authenticated Sports, Entertainment, Rock & Roll and Historical memorabilia. Partners Peter Siegel and Edward Kosinski specialize in sourcing and curating collections for individual collectors and corporate entities.

Pete Siegel, who co-founded GOTTA HAVE IT!® has long been known as an expert in the field of collectibles, specializing in sports and historical collectibles. His wide-ranging understanding of the collectibles business is sought after world-wide, with a clientele that spans the globe.  Ed Kosinski’s extensive knowledge of entertainment memorabilia has been tapped by such venerable institutions as the as the Rock and Roll Hall of Fame in Cleveland, Ohio, and Paul Allen’s Experience Music Project in Seattle, Washington, where he assists in the authentication of vintage and contemporary music artifacts. Ed founded The Rock and Roll Trust in 1989 to work with the Rock and Roll Hall of Fame to help preserve the integrity of Rock and Roll memorabilia collecting.

GOTTA HAVE IT!® has partnered with Sothebys for highly successful auctions such as The Beatles, Madonna (both record-breakers!), Baseball For America with Roger Clemens (benefiting the Twin Towers Fund) and Muhammad Ali. Auctions hosted on Gottahaveit.com include the extraordinarily successful Britney Spears charity auction, Kenneth Cole’s “Celebrity Help USA,” UGGs Australia (2003, 2004), Samsung’s “Four Seasons of Hope” and many more. Our Outreach Program has raised hundreds of thousands of dollars for such high-profile charities as the Juvenile Diabetes Research Fund, The Roger Clemens Foundation, VH1’s “Save the Music,” Muscular Dystrophy, and Long Island Jewish Hospital’s Children’s Medical Fund.

GOTTA HAVE IT!® AT MICKEY MANTLE’S RESTAURANT

On October 1, 2005 GOTTA HAVE IT!® opened our second retail store, at Mickey Mantle’s Restaurant, in the heart of Midtown Manhattan. The GOTTA HAVE IT!® experience has been re-created at this world famous restaurant where visitors can purchase collectibles right off the walls.

How to Contact Us: Main Store, Auction and Executive Offices

The Gallery at Mickey Mantle’s Restaurant