Fortunately Sony and Michael Jackson’s estate wised up and allowed the video to be once again posted on YouTube: “Eat it” did not have this problem 1984!! 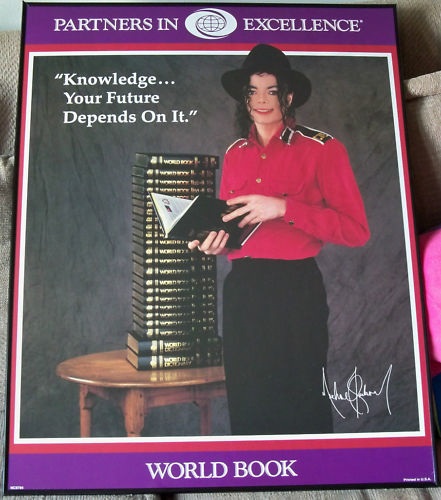 Branca and Sony: BLOCK Teen “Beat It” Parody Video, “READ IT” from YouTube

As the Michael Jackson justice seeking community continued their call for an end to the reckless sell off of Michael’s iconic clothing and hundreds of forged autographs – yet another John Branca/Estate orchestrated injustice was taking place at a Pennsylvania public library.

(excerpts from ABC News and the PA newspaper The Mercury reports):

Teens at [the Landsdowne Public Library] had hoped to inspire kids to read when they transformed the lyrics of Michael Jackson’s 1983 hit “Beat It” into “Read It” and posted it on the Internet.

Instead, they have a fight on their hands with Sony-ATV Records, which owns the rights to Jackson’s song with his estate and refused to grant them permission to post it on the Internet.

If [Michael Jackson] would have seen this ‘Read It’ video, he would have blessed it, and I’m just ashamed at Sony,” Lansdowne Public Library Director Sandra Giannella said in the video.

They blocked it not because of the music, but because they said the lyrics are not a parody. They said it’s a ‘message’ not a parody,” said the video’s editor, Abbe Klebanoff, head of public services for Lansdowne Public Library.

Monday afternoon, Sony spokesman Jimmy Asci declined to elaborate on the company’s initial decision to block the Internet broadcast of “Read It,” saying only, “A request was made to change the lyrics. That request was denied.” Sony/ATV Music Publishing administers the copyright for Michael Jackson’s music on behalf of John Branca, executor of the Jackson estate, explained Asci.

Sony’s licensing department… informed Klebanoff that “Read It” could air [only] on the library website… “It may not be posted on any other site (including but not limited to Facebook, Youtube, Vimeo, etc.)”

“You can’t put it on YouTube? What’s the point? If it’s online, it’s online,” said Klebanoff.

Lansdowne Public Library Director Sandra Samuel Giannella sees Sony’s concession as “not even a half measure; it’s a silencing measure.”

Giannella said representatives of the William Penn School District, the Delaware County Library System and the Pennsylvania Library Association all wanted to put “Read It” on their web feeds as part of the PA Forward initiative to promote the benefits of libraries. Teens, in particular, are hard to reach, she noted.

“It’s a ban from allowing us to reach a broader audience and to spread our message which is, ‘Read it,’” said Giannella.

Giannella, who saw Michael Jackson in concert around 1972 when she was a youngster, said she thought a “Read It” video was a natural considering “Weird Al” Yankovic’s 1984 parody of “Beat It,” called “Eat It.”

“I told Abbe and she told the kids who wanted to do it right away. They’re so bummed out. They just got slammed by Sony,” said Giannella.

Since Nov. 20, Klebanoff had been communicating with [Sony] via email and telephone in an effort to restore “Read It” to YouTube on behalf of about 16 middle and high school students from the Lansdowne area who had spent two months writing the new lyrics and choreographing the video… [Sony‘s response]: “The usage has already been denied by our approval party; you may not in any way utilize the work.”

Klebanoff decided to appeal to Branca and, on Monday, contacted his law office in Los Angeles via telephone. She was told to send an email pleading her case, but no time line was given for a response.

Sunday night, she traveled to New York City [Sony executive headquarters]… “I went to New York and was roundly kicked to the curb,” said Klebanoff.

Klebanoff did contact a copyright attorney who, she said, felt “Read It” did not present any infringement on Jackson’s legacy.

“He said this is fair use.  You’re a public library; you’re not making any money at all,” said Klebanoff, who noted she could not afford $500 an hour to hire the lawyer.

Giannella believes the late “King of Pop” would have appreciated the students’ video effort to raise reading awareness, especially in light of American libraries’ ongoing struggle to survive.

“People that own the franchise to the Michael Jackson legacy, they’re making decisions that go completely against what I think Michael Jackson’s spirit would have wanted for teens,” said Giannella.  “If he had seen this ‘Read It’ video, I think he would have blessed it.”

“If [Michael Jackson] had seen this ‘Read It’ video, I think he would have blessed it.”

Michael Jackson’s entire LIFE MESSAGE was to heal and learn and grow and to be everything you can be in this life. “Yes, I believe in me. So you believe in you. Help me sing it!”

In Beat It, Michael spoke clearly about the need for tolerance and NOT TO FIGHT but to reason. The short film to the song, as we all know reflected MJ’s message TO THE YOUTH OF THE WORLD that violence is not the way, but to reach above and beyond – to enlighten, educate yourself in life.

Michael made the Bad short film as a cautionary tale FOR THE YOUTH based on the real life story of a Harlem teen who on a visit home, was murdered by his former neighborhood friends for having gotten into an upstate New York prep school to build on his education and have a better opportunity in life. This tragic story of senseless violence moved Michael deeply and he wanted to use it to inspire children to educate themselves, to find a meaningful purpose and to contribute positively, non-violently to our world.

Through his Heal The World Foundation, Michael Jackson worked with his whole heart to give children around the world a chance at a happy, healthy, productive, purposeful life.

Michael cared about the betterment of all children in the world. He cared about the disenfranchised inner city children; the battered and neglected children in his own country. He sought to ensure the mind-body-spirit health and promise of all the little souls on the planet. It was his dream and his mission. And he knew that education was a vital component in the fulfillment of this mission.

Michael himself,  was a voracious reader – he absolutely LOVED to read.  He amassed an impressive, extensive collection of books of every genre in his library at Neverland, a source of true pride and joy for him.

Michael INSPIRED the best in all of us. Still does and ALWAYS WILL. Devil Branca can’t have that.

Prince of Darkness John Branca’s vendetta and consuming hatred for Michael Jackson and the beautiful light of LOVE MJ emitted on this earth – knows no bounds.  Branca hates Michael because Michael was and will always be EVERYTHING ole JB could never even think of being.

Branca, $ony and Co. conspired to destroy Michael Jackson in the flesh, and succeeded. And they’ve spent the past 3+ years conspiring to destroy his righteous Legacy; ALL he created and ALL he stood for.

In true Branca form, while screwing the kids at the Landsdowne Pennsylvania Public Library, at the same time it appears he was directing his spin meister PR team to write a filthy piece of propaganda (via Iconic Magazine) which was then posted on (Darren) Julien’s Facebook page. The agenda as always was to use Michael… TO QUOTE MICHAEL – as a means of shielding their dirty dealings in the Dec. 2, 2012 sell off of MJ’s clothes and forgeries. One line of their twisted, turn-truth-on-its-head statement reads: “How are we all to continue to share Michael’s love and legacy with the world, the children and the unknowing if we not only continue to fight amongst ourselves, but blast those who hold the keys to parts of Michael’s world we thought was lost forever?!”

“Michael’s love and legacy with the world, [and] the children.…”  SERIOUSLY, Branca?  Talk to the kids at Landsdowne Pennsylvania Public Library about that.

It is long over due for the masses to wake up and see the truth of what was done and STILL is being done to Michael Jackson.

Branca and $ony just keep proving that behind their power trips, power suits, and material “symbols” of wealth that Michael’s blood money has bought them – they are NOTHING but common thugs.  Schoolyard Bullies.  Hey Branca, why don’t you pick on someone your own size?  Oh, that’s right, you did.

TRUTH:  We all know Michael Jackson’s mission in healing the world and his belief in education, books, reading.. for the world’s children and for all ages.  Anyone running his estate and acting on his BEST BEHALF would be following Michael Jackson’s wishes.

As the submitter of this story stated in an email to us: “[The ‘Read It’ video] is a beautiful clip that we all know that Michael Jackson would love since he cares about children and children’s education…. There are a lot of spoofs on Michael Jackson songs, but why is this one the main target?”

MICHAEL’S MESSAGE – BELIEVE IN YOURSELF, AIM HIGH and ACHIEVE:

Lift Your Head Up High

And Scream Out To The World

I Know I Am Someone

And Let The Truth Unfurl

No One Can Hurt You Now

Because You Know What’s True

Yes, I Believe In Me

So You Believe In You

Help Me Sing It!