We had a reply to our certified Mail, Email to John G Branca, Via MJOnlineTeam(<Click), We were not satisfied so have sent a second letter, if you would like to send your own copy please click here, We had written two letters to the Estate with only one response….  Our second letter addressed the costumes supposedly returned to the Estate. As we have information John Branca refused to accept delivery of iconic costumes from Michael Bush! We have also had many fans tweet the same question,(<<<Click) with no response from the OnLineTeam! I guess no reply means this is true, No Costumes were given to the Estate as they previously stated!

Regarding our December 10, 2012 letter to you, the Co-Executor of the Michael Jackson Estate, we have received an indirect response not from you, but from Ms. Alicia Yeffe who has stated that she speaks on your behalf – at your instruction.

As with our previous repeated attempts to reach out to you, Mr. Branca to inform you of a now completed injustice, you have once again indirectly stated through Ms. Yeffe your detachment from any concern over Michael Lee Bush’s and Darren Julien’s December 2, 2012 Auction of hundreds of forged Michael Jackson signature items.  You state a complete disregard and apparent lack of concern for this egregious matter, thereby separating not only yourself as an individual Mr. Branca, but the Estate of Michael Jackson as a whole, which you represent.  No connection.  Not your concern.  How is that possible?

As a career law man you do understand, Mr. Branca the seriousness of forgery and the selling of fraudulent goods. The FBI and the United States Congress take this criminal matter seriously.  Consequently, there have been organized raids executed against counterfeiters all across the United States and those found guilty are severely punished under the law.

Like the damaging effect of illegal digital downloads upon the entertainment industry, criminal forgeries of an entertainer‘s name or likeness have a severely detrimental impact upon the artist’s enterprise and assets.  Regarding the former, a consortium of lawyers, record execs and label owners along with Congress made it a priority to aggressively tackle this misconduct head on – to protect the intellectual property of the contents creator and the financial investments and stability of a multibillion dollar global industry.  Clearly, that is the purpose of registering ones content with the library of congress, making sure trademarks are in place and up to date, while garnering the assistance of companies like ASCAP and BMI.

Mr. Branca, we do not have to explain to you what your duties are as a tax attorney, estate planner, entertainment lawyer, business manager and music publishing broker.  You have made this your profession for nearly four decades.  You have executed the vast, lucrative estates of Jim Morrison, Elvis Presley and now the greatest entertainer and humanitarian of all time, Michael Jackson.  You have negotiated recording contracts, merchandising deals and world tours for top named stars and spent nearly 30 years, off and on, with the biggest star of them all.  Again, that is Michael Jackson.

We know your resume, Mr. Branca.   We have witnessed very well your determination and ability to do your job effectively when it is your desire and mission to do so.  As Co-Executor, you know the importance of safeguarding the interests of Michael Jackson’s Estate and his benefactors – Michael’s beloved mother, Mrs. Katherine Jackson and Michael’s three beloved children Prince, Paris and Blanket – from theft of their assets, be it monetary, intellectual and/or real.

On behalf of the estate you went into litigation against Mr. Howard Mann for his use of Michael’s name and likeness on his Vintage Pop website, citing it was without the permission of the estate.  Mr. Mann obtained the memorabilia in a legal settlement, however, the estate did not take the stance that he could do what he will with the property that was his own.  Yet that is exactly the ongoing position you, the estate, has taken regarding Michael Lee Bush’s garment possession and sell off.  With forged signatures which are trademark of the Estate of Mr Michael Jackson. 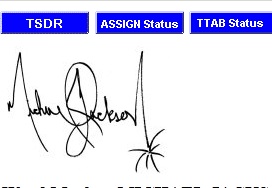 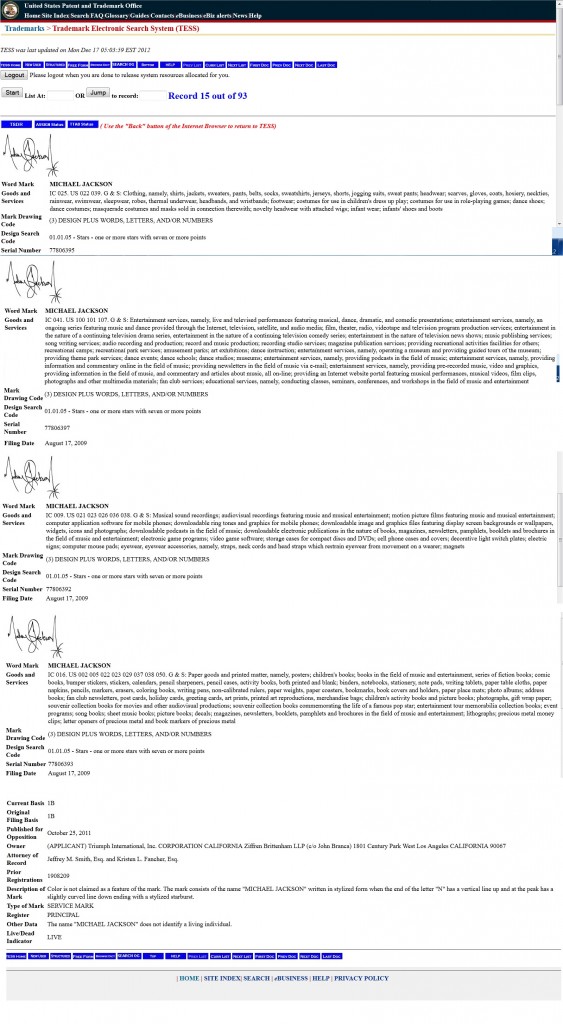 Are these type of disrespectful, degrading spectacles in regard and reference to Michael Jackson deemed acceptable to you, Mr. Branca as the legal Co-Executor and representative of Michael Jackson‘s Estate? No need to ask where Michael’s dignity is because he always had dignity and will always retain his dignity.  But where is yours, John Branca?

Mr. Branca, you wrote the Forward to Michael Lee Bush’s recently published book portraying many of the same forged items now having been sold by Julien’s Auctions on December 2nd.  This book was indeed used to help publicize the Julien’s-Bush Sale and was actively cross promoted/sold on site at Julien’s.  Being the astute and most capable lawyer that you are, we were certain this fact would have deeply concerned and appalled you, to discover that Michael Bush had actualized such a blatant, overt fraud against Michael Jackson’s Legacy and Market Value – which has been instantly depreciated and will continue to be negatively affected due to this criminal sell off of hundreds of fraudulently autographed Michael Jackson items.

According to Ms. Yeffe, who speaks on your behalf, “Mr. Branca’s foreword in the book is just that — a foreword in a book — and does not in any way signify his involvement in the fate of the items in question.”

That is a most illogical premise.  Things in life do have a meaning, purpose, significance and consequence.  Things that people chose to present in front of the World’s eye are not merely happenstances disconnected from their source.  Thus a forward of a book, is connected directly to the book in which it is printed.  And the individual who wrote the forward is relaying a connection to, interaction between, familiarity with, and promotion of the author and the contents of the book.  Therefore, a forward is not just a forward, after all.

How is it Mr. Branca, that you could write the forward to Michael Bush’s book, be that actively involved with these forged items, and not notice the forgeries?  You were Michael Jackson’s lawyer and witnessed his signature on many a legal and personal document.  So.  How exactly is it possible for you not to see the hundreds of blatant forgeries Michael Bush manifested upon the hundreds of items now fraudulently sold by Darren Julien at his publicly presumed reputable auction house?

One would think anyone connected to this sell off of massive forgeries, if inadvertent and unknowing, would become immediately outraged and indignant toward the perpetrator(s) who involved them in this unsavory matter.  One would think it would propel you, Mr. Branca to immediately do everything in your legal control to seek to rectify this injustice – by way of seeking legal recourse.  But that is not what the World is seeing you do, Mr. Branca.

It is beyond understanding and reason, not only to us but to the average person looking at this situation – and there are many looking – how a seasoned professional with the legal requirement to safeguard Michael Jackson’s Estate has chosen to publicly state an absolute unwillingness to do just that – preserve, protect and defend.

Mr. Branca.  You need to Stand Up, Defend and Protect Michael Jackson’s beautiful and righteous Legacy – everything he spent his entire lifetime working for, creating and achieving.  THAT IS YOUR JOB.  If you do not, then We do not understand in what capacity you suggest you are ethically or even competently running the Estate of Michael Jackson.

These fake signatures have instantly devalued Michael Jackson’s trademark, the very thing you are supposed to be effectively stewarding and diligently protecting at all times.

And now.  With the discovery of a “signed” cardboard standee sold at the Julien-Bush December 2nd sell off – verified to have been manufactured AFTER Michael Jackson was murdered, Michael Lee Bush’s criminal forgeries are a proven fact.  As is Darren Julien’s partnering in the fraud, apparently based on his continued publicly stated backing of Michael Lee Bush’s sold items.

This is still not registering any concern with you, Mr. Branca?  Why did you leave it up to Michael Jackson’s advocates to spend weeks working nonstop to bring this fraud to light – while you did nothing to stop it.  Prior to the auction, we were told in a form letter by your official representative, Ms. Alicia Yeffe states that you had to keep your email flow open for important matters.  THIS IS NOT IMPORTANT ENOUGH FOR YOU?  People unknowingly victimized, defrauded through the use of the name and likeness of Michael Jackson – to the tune of $MILLIONS OF DOLLARS.  This is not worthy of even a “look into” by you?  Please tell us, where do your priorities reside, Mr. Branca?  Are you competent to run this Estate, Mr. Branca?

STAND UP, John Branca.  Stand with Michael Jackson’s fans whom you know he loved and honored.  We, along with autograph authentication Professionals have proven this blatant, reckless mass production of Michael Jackson autograph forgeries.  Time now for you to join with us, DO YOUR JOB and take the necessary legal actions required to hold those criminally responsible and correct this attack against the Michael Jackson Estate’s continued financial viability.  Not to mention bring about some justice where justice is due.

Footnote:  In her latest form letter response speaking officially on your behalf, Ms. Yeffe states, “…we do not agree that the sale by a third party of any item reflects positively or negatively on the Estate (unless, of course, the Estate is actually involved directly in the transaction in question).”

Additionally, Ms Yeffe states, speaking as your official representative, Mr. Branca, “As has been stated previously, the Estate had no involvement in the exhibition or the auction and did not authorize, sanction or participate in either.”

Regarding the above two statements:

As we can all clearly see, the Estate of Michael Jackson is mentioned specifically by NAME in the Julien’s-Bush legal terms of sale of the hundreds of forged items in the December 2, 2012 auction.

“The author [of The King Of Style: Dressing Michael Jackson] will donate a percentage of the proceeds received from the sales of the book to MusiCares.”

According to your own website, Mr. Branca at http://www.johnbranca.com/charity-work/

“Branca now serves as Chair Emeritus of MusiCares. In 2010, Branca also was named Chairman of the MusiCares Capital Campaign to create an endowment for MusiCares.”

Mr. Branca, we are observant to see you have retained your professional, honorary title, thus retaining your relationship with the institution, MusiCares.

3.)  At 3:37 of the video http://www.youtube.com/watch?v=BLktZzTkNTk , Michael Lee Bush refers personally to you, the estate with a distinct degree of familiarity, “…the estate’s probably got some photos of him in it, some still photos…”

It is curious and telling that Michael Lee Bush would instinctively think to speak about the estate regarding anything to do with the clothing in his possession.

Contrary to Ms. Yeffe’s assertions on your behalf, the three examples listed above unequivocally show that the Estate of Michael Jackson did have actual, direct involvement in the auction and did authorize, sanction and/or participate in the “transaction in question“.

More than enough nonsense and time wasted.  Once again, John Branca.  Do your job required by law to preserve, protect and defend Michael Jackson’s Estate against this perpetrated fraud.

This was not sent, but this if for your information:- Estate owned trademarks, Not freebies for John Branca to give away!! 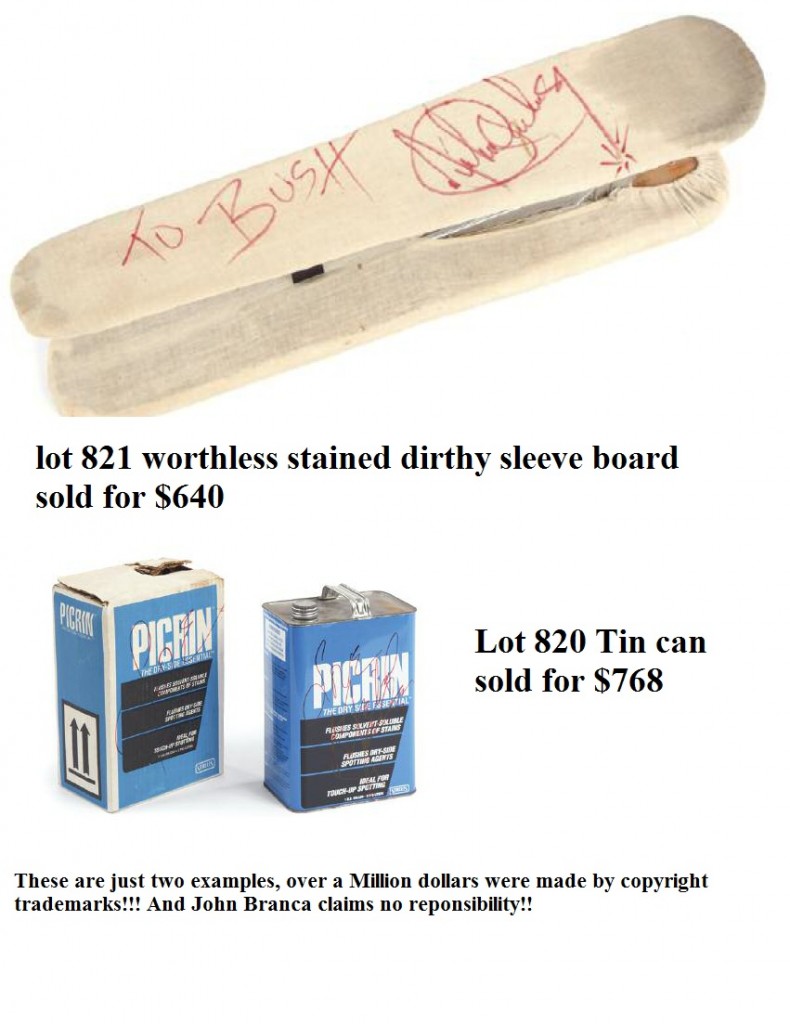