The following have been provided from the fan base.  If you think they are inaccurate, please let us know, as we want to provide accurate info.  We are reporting all possible discrepancies here, and asking you to look at them too with us.

By:-Admin1 –We found this interesting-although there is a chance he could have had it signed after.  In Feb of 09, Michael Bush posted this photo on his FB wall.  Unsigned. 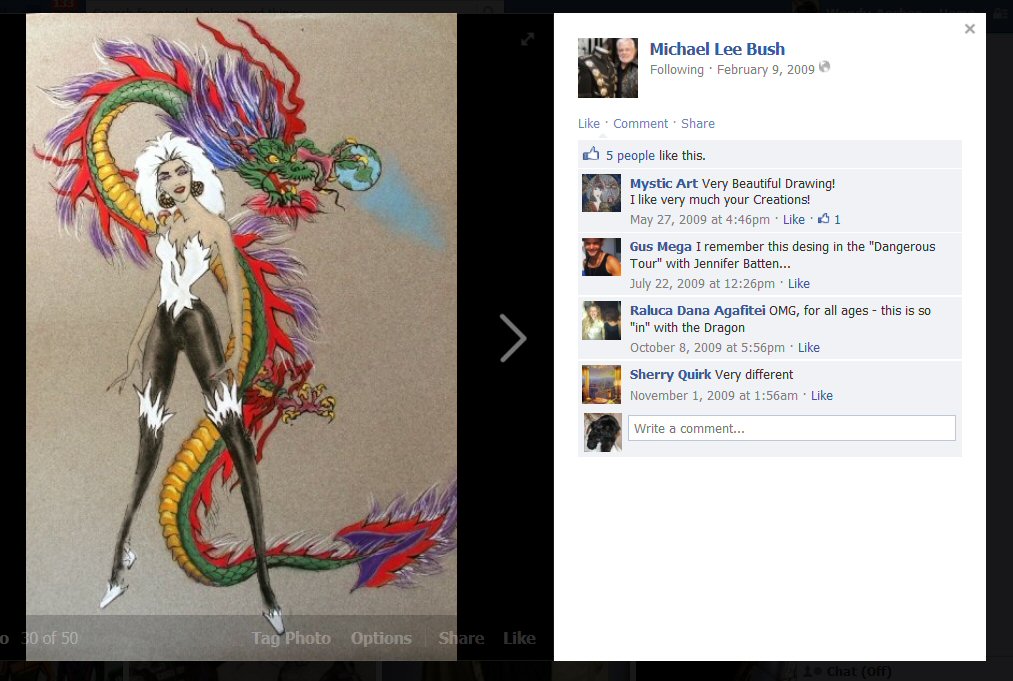 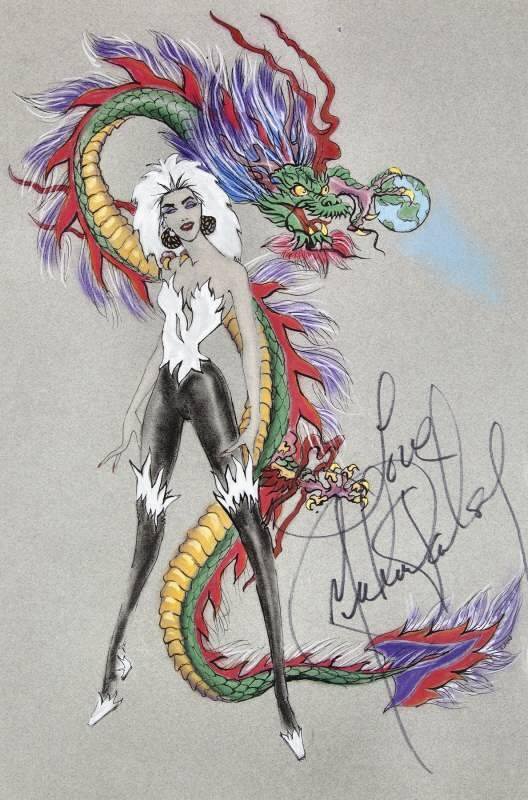 “An original pastel and ink sketch on grey paper showing a stage costume incorporating a Chinese dragon.  There is a small artist’s signature in the tail of the dragon reading “L. Ford.”  The page is signed in black marker “Love Michael Jackson.”  This is one of the costumes created for Jennifer Batten, Jackson’s longtime touring guitarist, for the 1992-1993 Dangerous World Tour.  The design, inspired by a Chinese dragon, was created using fiber optic lighting that Batten wore while performing.”

Darren Julien asked Bush how he came by so much signed memorabilia of Michael Jackson, Bush replied “When Michael would have surgical treatment at Dr Klein office he would visit our home to recover and we would get him to autograph the items”  Bush has never given us a date when ALL these were signed, going by the art work and date it was posted unsigned we reached out to couple of fans that were group of 15/20 that spent every minute of the day with Michael. 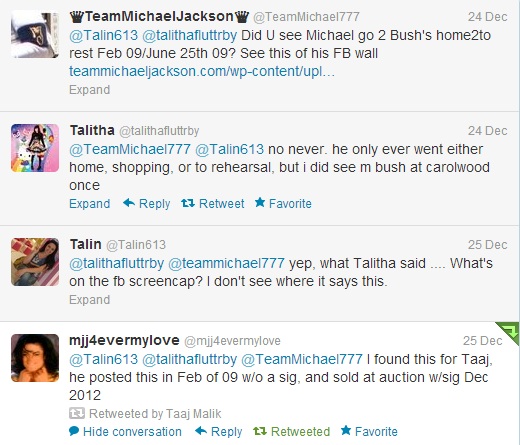 Seems like Juliens has been in the business of selling Michael Jackson items that don’t quite add up prior to the recent 12/02/2012 auction.   Notice the shoulder stripes (count) with Michael wearing the coat, and then the auction coat stripes.

The auction description reads:  Michael Jackson was photographed wearing this jacket on numerous occasions in the early 1980’s, with Frank Sinatra…..  Not quite Darren Julien!!   We wonder if Bush consigned this jacket?? !! 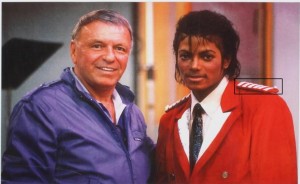 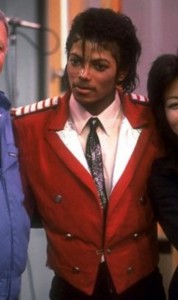 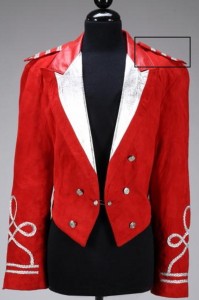 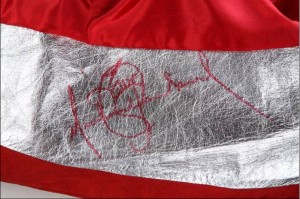 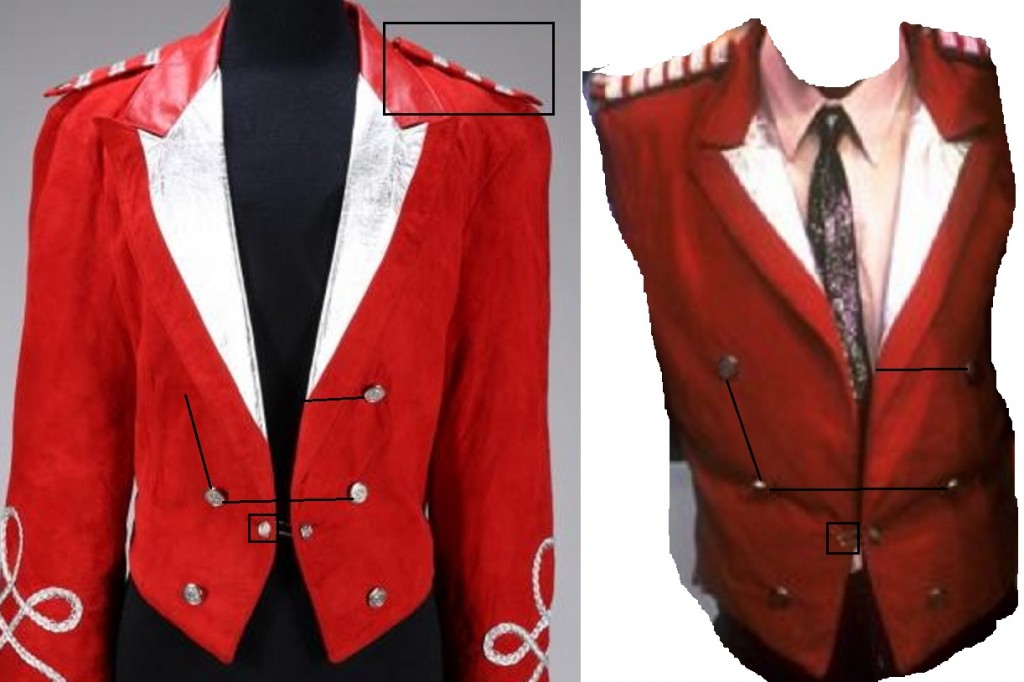 Also notice the distance between the buttons.

By:-Admin1 –This photo was posted on Michael Bush’s FB page in Sept of 2009.   The shirt was  in this auction signed.

I do believe that the signature goes below where the jacket opens, and should have been on the shirt in 9/09 as well.  I have no idea if there are doubles of this shirt that MJ himself wore.  The middle photo is from a fan at one of the previews.  The auction states the following:“A white spandex shirt featuring ribbed neck, zip closure at back of neck, and a rainbow motif. The shirt is signed in red marker “Love Michael Jackson.” Jackson wore this shirt as he portrayed Captain EO in the 3-D film of the same name, directed by Francis Ford Coppola and shown at Disney theme parks in the 1980s and 1990s.”Since finding this, the actual Disney display photos of the original costume have been found in a much larger format /wp-content/uploads/captaineolarge/  The auction shirt is NOT the one in the original display.  We are unsure if it was ever used for the Captain EO movie.  We will leave this up however as it shows the aging of leather in the photos in the above link.  Other older pieces in the auction (Thriller coat for example which sold for 1,800,000) should show age as well, and do not.  Why!

Perfect example of how things should show age and do not. 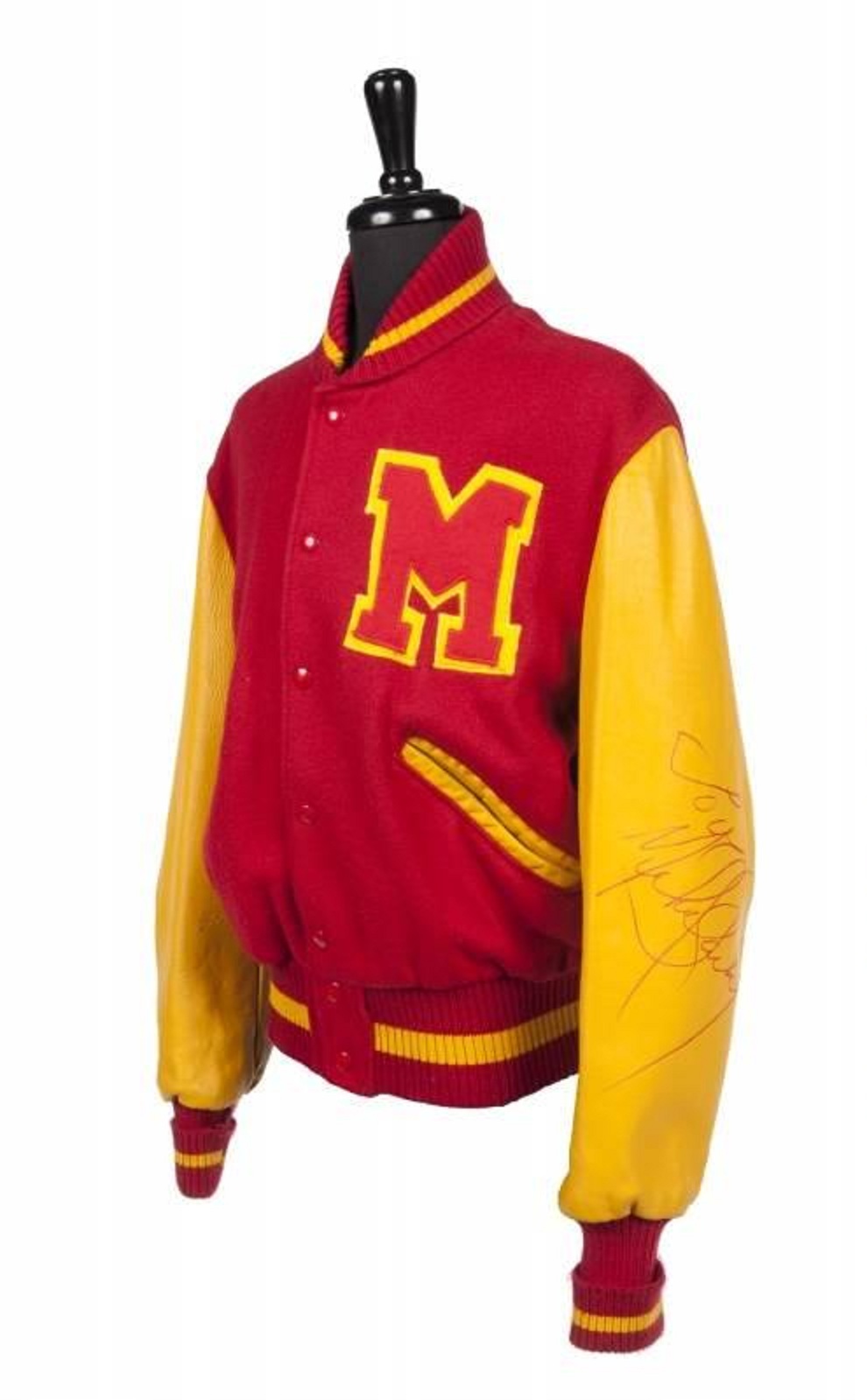 This item http://www.julienslive.com/view-auctions/catalog/id/77/lot/33823 should show age, yet it looks brand new.

From the auction description:  A red and yellow varsity style jacket with wool body and leather sleeves with knit cuffs, collar, and waistband. The jacket features a large “M” at chest and was worn by Michael Jackson as he transformed into a werewolf while performing “Thriller” live on stage during the 1987-1989 Bad World Tour. The left sleeve of the jacket is signed in red marker “Love Michael Jackson.”

Here is the REAL werewolf coat used in the Thriller vid.  Only used for the video yet look at the age compared to one used for several years above.  Something STINKS about all of this.  Mr. Bush can just “create” new clothing and plop fake signatures on them and say “Michael wore this”.  Does he really think we’re that stupid? 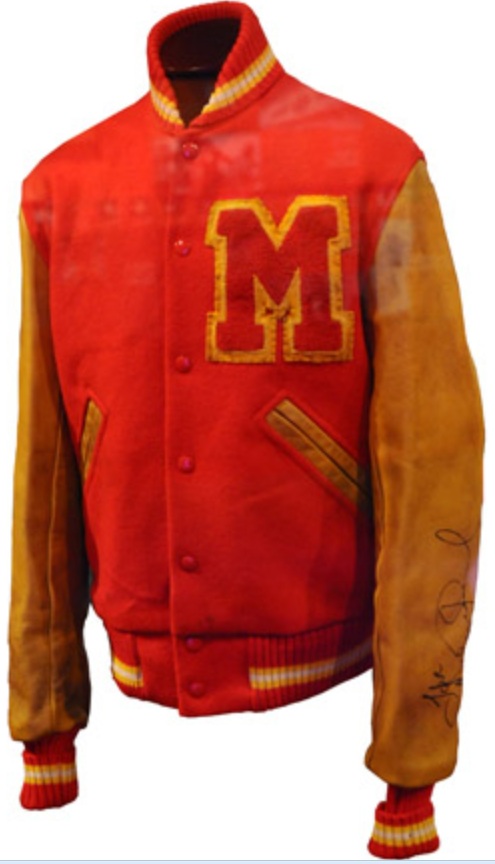