If anyone needs help with refunds from Juliens Auctions please email us Manager@TeamMichaelJackson.com 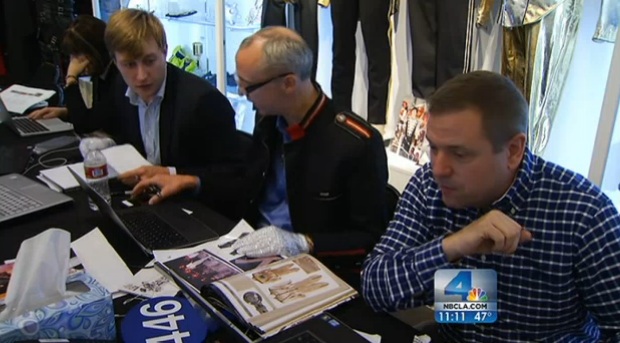 Yet another customer has been attempting to get their money refunded by Juliens auctions. Although Darren Julien promised  on Television NBC News to refund anyone who doubts the autographs, this is not the case.  You can see 4 Experts opinions(Two of which contacted Darren prior to auction) here.. http://www.teammichaeljackson.com/archives/6804

Thank you for your correspondence regarding your recent purchase in the Collection of Tompkins & Bush auction.  We are aware that there has been some controversy surrounding the “Collection of Tompkins & Bush” auction conducted on December 2, 2012, and we are sorry that you have experienced any concern or distress as a result of the unfounded allegations being made about the collection or Julien’s Auctions.

That we take great pride in our integrity, reputation, and goodwill.  For each auction we conduct, along with the information provided by the consignors, we engage in a thorough diligence process to attempt to authenticate the provenance of the auction items.  Among other things, if the item was worn for a public event, we will review videos, archival footage, photographs, or other pictorial records of the item and compare them to the item itself.  If the item involves a signature or handwriting, we engage in similar comparisons with known samples of the person’s signature and handwriting.

Autopen. Secretarial Autographs. PLEASE TELL ME Julien’s auction did NOT sell an MJ autopen signature as a real signature for $7,680. >>>>Read More…..Be sure to click “Next” at the end of the page

They’re hanging their hat on Laura Woolley.  Laura Woolley, who told NBC herself that she was an appraiser and not an authenticator.  Let alone “the foremost expert on Michael Jackson memorabilia.”  I wonder who considers her that other than Darren Julien and staff?  Holy geez.  Are they desperate, or what?

Ms. Woolley has worked with all of the top auction houses when it comes to items of Michael Jackson including Bonham’s, Heritage, and she is regularly consulted and engaged by Sotheby’s and Christies.  Ms. Woolley has confirmed the genuineness of the items sold in the auction.

The I-Team asked Julien to provide us with the names of any experts his auction used to authenticate the autographed items he sold for more than $1.5 million on Dec. 2. Julien told us to contact Laura Woolley, owner of The Collector’s Lab.

But Woolley told the I-Team she’s an appraiser of auction items, not an autograph authenticator.

We can understand why you would find the allegations troubling.  But, we would urge you to carefully review and investigate the credentials, qualifications, and motivations of the people making these unfounded claims before deciding how much weight — if any — to give to their assertions.

What are the motivations not honoring their commitment for a refund, 35% of $5 Million. hmmm

So John Branca, Co-Executor of the Estate of Michael Jackson and foreword writer of Michael Lee Bush’s book which was promoted for sale by Julien’s auctions – has never retained the ethical, honest authentication on any Michael Jackson memorabilia or signature from PSA/DNA or Roger Epperson.  Imagine that. Thats why the consumer is in this mess!!

We are aware of no one, other than the individuals themselves, who recognize them as “experts” in Michael Jackson signatures or handwriting.

Woolley told the I-Team “one of the authenticators used by the I-Team, PSA/DNA, is reputable.”

“I think they do great work,” she said of PSA/DNA.

In short, it is all too easy to proclaim to be an “expert” and to make frivolous and false allegations.  It is another matter altogether to support them with facts.

PSA/DNA and Roger Epperson, two of the top Pros…. “no expertise”?!  Talk about turning truth on its head.

Please be assured that we firmly stand behind Michael Bush and the items sold in the auction.  We hope this correspondence will put to rest any concerns you may have and that we can count on your continued support.  We truly appreciate and value your patronage. Michael Doyle. Consignment Director

What Juliens are saying here is, we firmly stand behind the 35% we have made out of these forgeries, and not willing to reduce our bank balance!