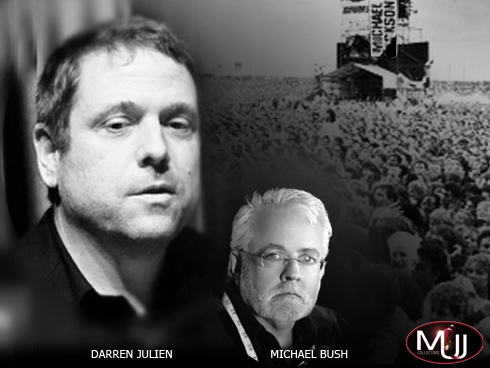 Since the announcement of the Tompkins & Bush memorabilia auction in November, Julien’s Auctions and Michael Bush have been the subjects of controversy and criticism among numerous members of the Michael Jackson fan community. The battle centers on the legitimacy of several autographed items from the collection of Michael Bush, recently sold in the auction that took place on December 2nd.Darren Julien, CEO of Julien’s Auctions, contacted MJJCollectors.com on December 12th and requested that we interview him to give him the opportunity to respond “on the record” to the accusations targeting his auction house and Michael Bush. For this exclusive interview, we allowed our members to submit questions for Julien up through December 18th, and then we compiled them and sent them to him on December 19th. On January 7th, he sent us his responses, which we publish below in their entirety. It is clearly the most extensive and in depth discourse that Julien has provided on this controversy to date.MJJC: Briefly describe the due diligence involved in authenticating a memorabilia item, especially in those cases where it does not directly come from the celebrity/subject (as is the case for all items pertaining to Michael Jackson).  Were each of these measures used in validating the provenance of each of the Tompkins & Bush auction items?DJ: Like any collection, whether they come directly from a celebrity, an estate, or, in this case, someone who was known for having a close relationship with and direct access to the celebrity, we engage in a thorough diligence process to attempt to authenticate the provenance of the auction items. Among other things, if the item was worn for a public event, we will review videos, archival footage, photographs, or other pictorial records of the item and compare them to the item itself. If the item involves a signature or handwriting, we engage in similar comparisons with known samples of the person’s signature and handwriting. With respect to Michael Jackson, we also have such signatures and handwriting reviewed by someone considered to be the foremost expert on Michael Jackson memorabilia, Laura Woolley from The Collectors Lab. Ms. Woolley has seen and authenticated more Michael Jackson signatures and handwriting than possibly anyone else in the industry. Ms. Woolley has worked with all of the top auction houses when it comes to items of Michael Jackson including Bonham’s, Heritage, and she is regularly consulted and engaged by Sotheby’s and Christies. Finally, as with all auction houses, we rely upon the representations made by the consignors when they consign items to us for sale…….