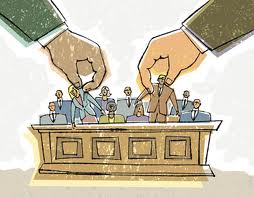 At this stage of jury selection, prospective jurors have already been released/excused from serving on this case based upon screening them for hardships, time-qualifying issues, or, some have been excused based upon their indicated affiliations or relationships with the Plaintiffs, Defendants, witnesses, or attorneys.

The next step:  “Voir Dire,” is where we are now. Voir Dire basically means “to speak the truth,” or “to say what is true.”  Once the jury room assigns a panel of prospective jurors to a courtroom for consideration, they are administered the “Oath Re: Perjury Admonishment.”   This oath requires the prospective jurors to swear that they will “accurately and truthfully answer, under penalty of perjury, ALL questions propounded [to them] concerning [their] qualifications and competency to serve as a trial juror…”  There is more language in that oath, but that is the essence of it.

Voir Dire is a VERY important process because now the attorneys (and the Judge) have opportunities to ask direct questions and make more specific inquiries of the prospective jurors to help determine which ones would be the best possible “fit” for the trial.  During Voir Dire, the Judge will also interject questions:  1) to further delve into certain issues with prospective jurors, 2) to help clarify information that is being discussed, 3) and to help clear up possible confusion regarding the “law” as it pertains to answers/feedback being given by jurors/attorneys. The Judge can also assist by expanding on or simplifying questions being raised by the attorneys.  Also, the Judge can and will intervene in juror questioning if something seems to be heading down an inappropriate road…

And even though the prospective jurors are under OATH to tell the truth, some prospective jurors deliberately say some pretty extreme things or express harsh feelings and views from the very beginning, just to be released from jury service.  Well, some of what they are saying might be true and some of it might not be true…

So even though they are under oath and we want to believe that they are answering truthfully, it is very important for the attorneys and the Judge to carefully consider everything the prospective jurors are saying…  Some of them could have the potential to DOOM this trial (or any trial) from day one.  ALSO: The attorneys and the Judge are very mindful of how a jury pool can become “tainted” or “skewed” by some of the responses that people giving!!  All it takes is for one or more prospective jurors to KEEP saying particular things to get “excused” and bam, all of a sudden you have TWENTY prospective jurors saying the same or similar things to get excused if they see that it worked for someone else!!  It could be anything like “Hey I really hate Michael Jackson, period” or

“I think AEG murdered Michael Jackson to steal his money…”  etc.    People have even expressed blatant racial prejudices during jury selection! (…they might be telling the truth)   EEEEKKK!!!   But it is not good for someone to deliberately say disturbing, belligerent, or disrespectful things that are NOT true, just to get out of jury service.  Certain things that prospective jurors say during Voir Dire really can potentially “taint” an entire pool!!   It’s not an everyday thing, but this kind of careless behavior HAS been exhibited during jury selection on cases, and it has happened to such an extreme extent that Judges have actually had to dismiss an entire prospective jury pool and START ALL OVER with a fresh new batch!!   It further delays the trial and wastes very valuable time.    But some of these people actually ARE sick and twisted and don’t belong on ANY juries…  so that stuff comes into play during jury selection.

The goal of questioning the prospective jurors directly is to try to assess each one’s ability to be as fair, impartial, and open-minded as possible.  I emphasized “try” because it’s not really possible for the attorneys (or anyone else) to always know if someone is answering a question with complete honesty.   Many people have some sort of biases and/or prejudices:  some are obvious, some are not.  Many people have unwavering viewpoints on certain issues, some are positive and some are not.  But the hope is that the selected jurors can and WILL set aside any biases, negative views, and pre-conceived opinions that could interfere with their ability to be a fair juror to both sides.

So basically the attorneys (and the Judge) are seeking to seat 12 jurors (and alternates) who are willing (or seem to be willing) to be “fair” over the entire duration of the trial.   And it is especially important that the selected jurors are willing to first hear and see ALL of the evidence in the case, to the very end, before forming any final opinions. The jurors will continuously be admonished about that requirement/expectation throughout the trial.

Ok so here’s how the attorneys are permitted to “kick” a prospective juror off the case at this stage:   The attorneys can have a juror excused by exercising the following options:

1)  Peremptory Challenges:  In civil (and in criminal) cases, each side has what are called “peremptory challenges.”  In a quick nutshell, a peremptory challenge allows the attorneys to ask the Judge to excuse a juror WITHOUT  the attorneys having to give any specific reasons at all.  Peremptory challenges are limited to a certain number for each side.  Since these challenges are strictly limited to a certain number, they are like gold. This is the “easy” way to “get rid of someone” without having to explain it, so the attorneys exercise these challenges very carefully.  *However, there ARE times when one attorney might accuse the other attorney of intentionally dismissing jurors who seem to have certain characteristics “in common,”  like race, gender, religion, or other characteristics that CANNOT be used to systematically eliminate people from a jury. If one attorney notices such a “pattern,” he or she can bring it to the Judge’s attention at side-bar and the Judge will have to review the eliminations to see if there DOES appear to be a pattern of elimination that one side has been engaging in.  There can be consequences for an attorney doing that, but I won’t get into it here…  (you can Google “Wheeler Motion” if you are curious)…

2)  Challenges For Cause:   To exercise this elimination method, the attorneys MUST give the Judge specific reasons for asking to excuse a particular juror.  Sometimes the attorney has to “argue” his or her position because the opposing attorney might not agree.  Attorneys can ask for elimination for “cause” based upon a number of factors stemming directly from something a juror has said that leads the attorney to believe that the juror cannot be fair, or that the juror is unduly biased, or that he/she cannot adequately serve on a case because he/she has answered a question (or behaved in such a way) that demonstrates an inability or unwillingness to “budge” from a certain position, mind-set, or opinion regarding the case, the Parties, or even the law. Challenges For Cause are done “outside of the presence of the prospective jurors,” which means that the jurors are NOT permitted to hear these challenges.  The audience members in the courtroom are not permitted to hear these challenges either, so the attorneys and the Judge will conduct these challenges either at side-bar, or in the Judge’s chambers, or in the secure hallway area right outside of the Judge’s chambers, whichever area ensures the most privacy.  The Court Reporter does participate so that there is a record of these challenges.

The Judge does NOT HAVE TO excuse a juror just because a Challenge For Cause has been raised by an attorney. If the Judge does NOT find that the “reasons” stated by the attorney are valid, the Judge can deny the challenge. If the attorney adamantly believes that he/she needs to eliminate that juror, then the attorney will have to use up one of their Peremptory Challenges. Here is where you can see some attorneys get rather agitated and heated at side-bar if they are running low on Peremptory Challenges and they are not happy with the panel as presently constituted, and they know that they might run out of peremptories BEFORE they can eliminate the people they REALLY need/want to eliminate.

3)  Stipulation:   This option means that BOTH sides agree to eliminate/excuse a juror for specific reasons, and the reasons are not necessarily “negative.”   One example is a language barrier issue.  During questioning, it might become clear that a juror does not speak or understand sufficient English to participate in the proceedings.  Sometimes attorneys agree on the apparent or not-so apparent language barrier issues, sometimes they don’t…   There are other examples where attorneys will “Stipulate” that a juror can/should be excused/eliminated.