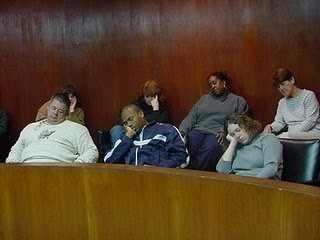 Brian Panish(Jackson attorney) Questioned 18 Jurors in the “Box” Jurors box, process of elimination will be used, this is still early stages. As each seat is vacated another of the 59 available Jurors in court will take the seat, if none are dismissed, then that is who the jurors will be. Please also read “Voir Dire” to understand this process more.

Juror 1. Male. Is a Civil Engineer,  has prior jury experience in civil and criminal trials. One of the cases he sat on was when an elderly lady who slipped then hit a bus. Other was traffic collision, juror stated he was very frustrated as the diagram/Maps of the collision was not very good, he felt like drawing it himself being a civil engineer is perfectionist in that field, felt there was lots of confusion caused by the data provided by LAPD, he has no problem awarding large amount of damages, though no sum can replace a lost one, said if someone close to him died he would sue too. Had no opinion of MJ as he was not his generation, don’t watch news on TV or magazines, but did say he felt Michael needed to work on his ethics, then said “We all need to work on our ethics” People in the public eye need to set a standard because they are role models, felt Michael did not do anything good with his life, humanitarian, Public figure looked up to, could have put to good use(side note, he obviously doesn’t know about the MILLIONS MJ donated, and his children around the world) his daughter works as an independent film maker, wife is retired lawyer worked in general law.

Juror 2. Male. Is a Life coach, helping with financial, emotional and family etc needs., Speaks to person, listens, sets goals. Was professor as English being second language, teaching English to German, French students? Wife was defendant in a lawsuit, no negative feelings about lawsuits, felt his wife was unfairly sued, she fell broke nose, and could not get to her appointment. Have no problems with plaintiff or defendants in this lawsuit. Said it was unfair when media went after Michael “It was a lynch mob.”

Juror 3. Male. Has his own business as silk screening, has small shop with one person working in the shop. Has regular clients. If lawsuit is justified then its fair thing to do. Not for or against AEG or Michael. Felt Michael had hard upbringing, faced many turmoil’s. No opinions on Katherine Jackson, but felt carelessness on Michael’s part. No negative feelings about 2005 trial. Some prescription drugs are very addictive, his mother was addicted to same, had very hard time getting off them, without success, not been in touch with Mother for long time, Siblings live in other states, not seen them in a long time, but would like to more often.

Juror 4. Female. Paralegal worked with big law firm, was codefendant in a case with AEG attorneys. Has worked on case involved racketeering, mobsters. Drugs, wire taps in the federal court. Mentioned name C Manson. Works primarily with defendants, no problem ruling against AEG, but likes them for their work in LA. Brother involved in road traffic accident. Suffered severe injury, couldn’t walk, filed a lawsuit, and was not happy as he still cannot walk. Lawsuit was against the insurers. She won’t hesitate in awarding large amount in damages, can’t remember attorney who acted for her brother. Understands when someone is dependents on prescription drugs as her brother is, and when he has not had his meds she has seen the effects. Some people think you can stop prescription meds, I don’t agree.

Juror 5. Female Engineer Scientist, involved in jury service before, one case involved workplace injury. Was at least 5 yrs ago, if its fair, bring case to trial, felt jury systems works good, we deliberate together, known of MJ, no opinions. Friend from work bought mal practice lawsuit, and were upset because they didn’t win, she advised them not to but they did anyway. Case involved a death, has no info on this case, no experience in family, self, or friends with prescription drugs, but felt if its needed should be taken, she had heard MJ died because of drugs, don’t know what happened. Reads LATimes not read about present case, doesn’t know much about Murray. She can set aside anything she has heard, all she knows about AEG is they were going to bring football team to LA.  Felt if there is cause a lawsuit should be bought forward to hold defendant responsible for financial accountability for negligence.

Juror 6. Male. Felt there are too many lawsuits cost too much money to courts, waste of money. Damages are often too high. Even if case is proved has problem awarded a high amount. Has problems with rich people suing rich people. Not fan of MJ, saying MJ was not a good person, his mind is made up, can’t be changed regardless of evidence presented, amount should be capped against what is awarded. Biased against plaintiff, don’t like them because he does not like Michael, don’t like Prince, Paris and Blanket because they are Michaels children. Wrongful Death lawsuits are waste of time. Rich folks against rich folks serves no purpose. Don’t like AEG either. Doesn’t know anything about them, just doesn’t like them. Said Michael was a child molester

Juror 7. Male. Legislators, Health Policies, HIV. Travels to Sacramento to lobby, testifies when in Sacramento. Has witnessed many testify feels he recognizes if a witness is credible or not. Its ok for loved ones to come to court to sue, if they have been violated, if evidence and law warrants. Can award high damages, never been on jury. On addictions, if it was easy to beat it would not be an addiction. Had some one very close to him die of addiction, can separate personal issues from this case. Tries not to have opinions on others. Felt thoughts are filtered due to what the media can do, it can be spun by the author for the effects they want. Does not know Mrs Jackson, met Michael once at a HIV fundraiser with Liz Taylor, observed Michael was very shy, and uncomfortable around large crowds.

Juror 8. Male. Seemed to have hard time understanding questions, didn’t answer many cause he said they did not apply to him. No thought on excessive lawsuits but would sue if a loved one died due to negligence. Feels damages should be capped, too much awarded for no reason but if law requires has no problem awarding large amount in damages. Unfavorable to “This Is It” just saw a short trailer, unfavorable to AEG, didn’t know why.

Juror 9. Male. Served on Jury previously. Which was when a shop owner used vegetables in a meat grinder, grinder would not work so he put his hand in the grinder, lost his fingers. One juror in that case went way beyond what judge instructed and bought a dictionary in to the deliberation room confusing all the rest. He learned a good lesson not to go beyond jury instructions. Would never do that again, that trial was ruled a mistrial. Is very reserved with his spending, drives a car but his parents always tell him to buy a new one, says he has a working car, and does not need to buy new one. Says he is very conservative. Has no thought about capping damages awarded, but says there must be a balance between loss and damages. Not really into MJ because bought Thriller album but stopped listening to it after few months. Felt Michaels image was because Michael did it for attention, felt the same about all celebrities, but not the ones from the golden oldies. But said he would listen to the case impartially. Wanted to discuss some matters in private.

Juror 10. Male. Has daughter living with him, son is away in another State. Also plays football, hes ok awarding large damages, ok with lawsuits, no opinions about Michael or the trial of 2005.

Juror 11. Female. Pathologist. Knew Dr Warren from witness list. Majored with him at UCLA. Both wife and husband Majored in Bio Chemist and basic research cancer, have published papers, Juror was at UCLA 15 years. Husband was Pathologist, Deputy Coroner at UCLA. But did not practice it, didn’t work for the coroners, did not perform autopsies. Now husband works in Nevada as chairman of pathology. Juror enjoys hobbies now selling on Ebay, has had 3 jury services if asked about medical opinion by jurors in jury room will not insert her “Professional opinions” to confuse the jurors as they need to relay on evidence presented in court. Has treated patients for addiction of pain meds at UCLA, feels it’s not easy for addicts to be drug free. Had Demerol once but had an allergic reaction. Ok with awarding high damages, once she witnessed a patient craving for Demerol it was difficult to say NO to. Served once as juror in traffic court. Served once on a case whereas a Dr was suing a bank for breach of contract.. Felt it was within the Drs rights to bring the case.  No thoughts on 2005 trial.

Juror 14. Female. Currently involved in a lawsuit involving her sister’s 3yr old child. Child when newborn was taken into care from mother for narcotics use whilst pregnant. Has 2 yr old child herself also. No opinion on amount of damaes, seen lots of media coverage on Murray trial, and Michael, but can set it all aside. Says wrongful death lawsuit can’t bring a person back but the negligent party should be sued, no issue with awarding high damages.