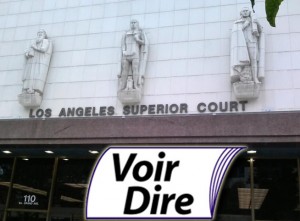 —  Getting ready for Voir Dire, took long time arguing what should and should not be on verdict forms. Will update you later.

—  Can you believe AEG were going to hold Mrs. Jackson liable for the death of Michael Jackson!!! Judge ruled against it.

— We have 104 prospective Jurors for the first day of Voir Dire.

—  Couple of jurors questioned privately who knew a few people on the witness list or attorneys in the case.  One of the Jurors has a best friend who worked on TII. His mind is made up, already knows “Facts”, was at memorial with KJ and MJ3. “Excused”.

—  The claim against Mrs. Jackson would’ve been a countersuit.  Don’t worry AEG and Judge dropped it.

—  As reported last week, all jurors from panel F onwards were supposed to be excused for the day. Didn’t happen. Plans changed, all sat in court.

—  Juror this morning wanted to be excused. His daughter works for an MJEstate accountant, was excused because found to have difficulty processing info.

n  Juror was excused as her employer only pays 4hrs per day, works as parking attendenat for LA City

—  There were lengthy discussions with counsel about what/who should be on Verdict form for Jurors when finding liability. Should forms read: Randy Phillips, Paul Gongaware as opposed to AEGLive, AEGLive Productions (which was formed for TII tour).  Judge will rule later.  There were lengthy arguments whether Conrad Murray’s name should be on a line, Also Michael Jackson!

—  AEG stated Guardian ed litem had to do a waiver for plaintiffs to receive any damages awarded. Panish stated this to be ridiculous as judge assesses who is awarded portion of damages. THIS IS ANOTHER PLOY BY AEG, ENTRY DOOR FOR BRANCA, AS HE CONTROLS GUARDIAN ED LITEM.

—  AEG are playing every card possible to give entry to Branca. Usually award to minors is deposited into trust account until they are of age.

—  AEG attorneys saying MJ was not “sole” supporter of Katherine Jackson, so will try to reduce damages from this angle.  Saying other family members supported KJ.

—  One juror has a very close friend, talked to every night, worked on This Is It, knows guitarist too, Music producer, Lisa Maria, Sharon Osbourne, met Randy Jackson (just said “Hello” to). He said he heard every night what was happening at TII . Judge asked him if he could put everything aside, focus on the evidence presented in court and reach a decision on the evidence.  He replied “I know what happened, now people are trying to do other things, I know the facts first hand already”. Sidebar called. Juror excused.

—  Another juror’s mother knows Dr. Warren for 25+ years, had brunch with him just yesterday. Not excused.

—  Another juror was at a social gathering attended by Murray (after 06/25/09).  Didn’t know who he was until Murray was announced in the news.

—  Another juror has religious believes against passing judgment/awarding $$ damages. “It should be left up to a higher power“.  Judge DIDN’T excuse.

–        Juror says her she was real estate agent for one of the witnesses for defense.

—  Another juror stated she had met Tom Mesereau few times via Bar/multi cultural events. Not excused.

— Juror has says the defense law firm are her husband’s clients, was excused

—  Court tomorrow: Judge is ruling on unsealing documents and lifting protective order.  Will keep you posted.

—  Court is out. We have 86? jurors left.  Some came with updates of availability, some others asked to be excused.