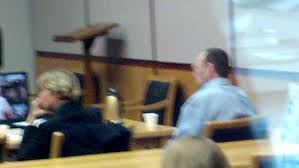 Consisted of selecting alternates of 6.

A 1. Male. Went to a trip to Vegas, passed out (I suppose with drinking and partying) said hes doing again at the weekend. His experience with “Drug use” is from he prior employment as Parole agent, rehabilitation programs. Puts users into drug rehabilittin facility instead to prison, gives them an option. Follow up to make sure they attend, and complete their program, if failing takes tehm before the parole board to decide what to do with them. Now works as  Insurance fraud inspector, being an inspector is experienced in basing decision on facts.

A 2 Hawiian Male. Has lots of jury experience, 5 criminal, I civil. The personal injury case involed something similar to assult and battery by patrons of a nightclub against the way security handled them. Used to be auto mechanic now works for ups. Has very positive things to say about the justice system, feels it works. Has not opinion on the awarding high damages. He needs to see facts before can decide a case. Can follow the law as instructed by your honor. On media about Michael Jackson replied he heard MJ died of intravenous drugs. But can set that aside when deciding this case. Felt it was odd Michael liked to associate with children. Felt his public image was odd, but stated people are not always what they portray themselves to be in publc,  believes all of that will not effect in deciding the case impartially

A 3 Hispanic Female. Says she has not seen any cases before, is interested in what and how it will be presented. Feels some amounts awarded are large, but they have to go on what is presented, hasn to problems awarding high dames, if she was in that position would consider 100% to sue for wrongful death lawsuit, depending on the medical bills etc., and based on evidence. Feels those addicted to prescription drugs can over come with lots of will power. But wants to listen to what both sides present. Saw TII documentary, says its was ok, was based on his last day at rehearsals. Seen things in media thought Michael died due to too much medication. But changed her mind now because she does not have all the facts.

A 4 Ukraine, Female No strong opinions from media. Does not believe everything she reads in media. No opinion about Michael being responsible for his own death. Wants to see evidence before she wants to base her decision. Was very worried about making any decision before see facts/evidence presented. Her daughter was involved in a personal injury claim, can’t remember if it went to trial or not, used to listen to Michael a lot over 13yrs ago. Grand daughter watched “Free Willey” loved the song at the end, watched it 30/40 times, found Michael extremely talented, his voice, his harmonies. But has not listened to any MJ music since her grand daughter moved out. Been in the USA 20 years. Did not buy any MJ albums herself but granddaughter had loads of videos. Music. She loved Michaels art, the feeling he gave her was she could not explain or put into words, didn’t like all his music. Gave her harmony completeness. Worked as accountant in Ukraine. Of a construction company, husband worked for same company constructed roads. Mother is Dr. Nutritionist worked for the hospital. Father was engineer but she did not speak to him as he passed away that many years ago, during the war. Feels Murray is entirely responsible for Michaels death. But Michael partially responsible, she heard about prescription drugs, feel he was part responsible. But can put that aside to hear evidence, was very worried about getting all the facts before deciding

A5. Male. Works for AT&T feels he is pressured into sell, sell, sell, works as customer service, does know juror number 4. Basically feels the same as her about his work, somewhat, didn’t really have any opinions on anything from the questionnaire. Can be impartial.

A 6 Asian Male. Consultant for IBM for past 3 years. Previously worked as independent contactor whilst going to school. Works with directors to CEO’s etc. that need objective analogy for prospective clients, . collects info via interviews makes recommendation, works with team . Considered wrongful death lawsuit as part of party. His companies employees over 450,000. Has had personal contact with those in entertainment field, knows a lot of people from that circle from attending school. Been in LA 9 years so social circle includes many. Father was burned, died in Atlanta Georgia. Is ok with similarities, can judge fairly for both sides, thought Michael favorable entertainer but unfavorable as person, but can be neutral. From the media etc, heard about Dr Murray but willing to hear evidence, not affected by what was heard. It’s not hard to except that big companies do wrong. Purchase “BAD” Cassette when he was in 4th grade for his uncle. Uncle had Thriller album.