IRS VS JOHN BRANCA, JOHN McCLAIN-Petition for redetermination of the deficiencies of Estate Tax

We have read and re-read this document and its obvious to see that John Branca is in way over his head, his underhandedness is catching up to him. What’s in the dark shall come to LIGHT!

There are deductions that one can get against liabilities (debts owed) that reduces your tax liability by reducing the value amount of the asset/holdings in question. Which result in lower taxes to be paid. The IRS has cited the Estate Executors John Branca and John McClain for undervaluing Michael’s Likeness, Music Publishing, and Tangible Property to include valuable cars that were declared and those that weren’t.

IRS totals for Schedule K titled Debts of the Decedent

The Estate reported at the time of Michael’s death, that his debts were a staggering, Half a Billion dollars. The Estate claims this exorbitant debt is the reason why Michael’s benefactors; his Mom Katherine Jackson and his minor Children Prince Paris and Blanket’s trust were not funded and remain empty still, four years after his death.

The amount the Estate Executors John Branca & John McClain, state on 2009 Estate Tax Returns as the CREDITORS THEY PAID OR AGREED TO PAY, at a time when the Estate, Wall Street & The Media said that Michael died leaving a mess of his finances with high interest loans on his assets and a long line of creditors judgments staff and lawsuits all waiting in line to be paid. This is the amount of debt the Estate declared to the IRS that they paid or agreed to pay

The Estate Executors have publicly discussed its plans to pay back the half of billion that they say Michael owed. How is it that they have only declared on Estate Returns a debt of $28,236,071? They may try and say that they only declared the maximum allowed on a return, but we don’t buy it, 28 million is far cry from 500 million which is half a billion dollars. Billlboard reported in a year after Michael death to have generated One Billion dollars for the Estate and that Michael’s debts were all but paid off. Where have all these hundreds of Millions gone if they were not owed to debt? Why are Michael Benefactors still without their inheritance?

The Estate Executors did further undervaluing of Michael’s personal publishing company MiJac which contains all of his music and the music of other music greats.

MJ Publishing Trust contains MiJac; the Estate says its value was $2,207,351 because of a 72,152,649 liability against it. The Trust according to the Estate has only 3.5 million in cash and a valuation by their appraisers of $70,860,000 subtracting the liability is how the estate says they got their figure.

What’s Michael Jackson’s image worth? A $434 million question for the IRS

What’s a face worth? Or a look? Or a dance move?

When it comes to Michael Jackson, there’s a huge difference between how the government values his image and what his family thinks the likeness of the “Man in the Mirror” is worth.

There’s a big disparity over Jackson’s image, as well as his recording legacy. The late singer’s estate said the taxable value of his image and likeness was $2,105 — while the IRS says it’s more like $434 million. The estate’s stake in Jackson’s recording assets was valued at $469 million by the IRS, but was not even included in a 2009 estate filing.

The Internal Revenue Service says that the Michael Jackson estate owes $702 million in federal taxes, plus penalties, according to charges the agency brought in U.S. Tax Court.

IRS representatives say the estate has undervalued the late “King of Pop’s” assets by hundreds of millions of dollars, amounts they say were not disclosed in a court challenge the estate filed in July, as a response to a bill from the IRS.

Essentially, the estate is saying Jackson’s legacy is worth considerably less than the tax agency believes it is.

“Every estate wants to lowball the value of assets,” said Alex Raskolnikov, a professor at Columbia Law School, who specializes in tax law. “The amount of tax an estate has to pay is based on the value of the assets.”

Raskolnikov told NBCNews.com that there is no magic formula the IRS uses to determine the value of assets. “When there is an audit and a valuation of substantial assets (over $50,000), they will use a panel of experts.”

He said, for example, if artwork is involved, the tax authorities will consult the experts in the field to put a value on the assets.

But, when it comes to a likeness or image of a celebrity, as opposed to physical assets, Raskolnikov said, “it is prone to disagreement.

“If they (Jackson estate) do not settle, the IRS will get its experts and the family will get theirs and there will be different valuations.”

Then the case will probably go to federal tax court, he said, rather than district court, where taxes would have to be paid in advance.

“Given the valuations, I do not think the family will want to go to district court,” Raskolnikov said. In tax court, the estate will not have to pay any taxes or penalties beforehand, and then, only if the court rules in favor of the IRS.

Jackson died on June 25, 2009, which is the date of the estate’s tax return, and left his estate to his mother Katherine, his three children and various charities. The filing the estate submitted indicated that his estate was valued at $7 million, for tax purposes. But in May the IRS said that was deficient by $505.1 million, plus penalties of $196.9 million. Tax Court documents indicating the amounts were released Tuesday, said Reuters.

A spokesperson for the Jackson estate disputed the IRS’s appraisals, telling Reuters that they were “based on speculative and erroneous assumptions unsupported by the facts or law.”

So far, the Jackson estate has paid $100 million in taxes, said the spokesperson.

How much would you pay for a Bentley Arnage driven by pop icon Michael Jackson? The IRS says the car is worth $250,000.

The Internal Revenue Service is seeking more than $700 million in tax penalties from Jackson’s estate, and after a U.S. Tax Court challenge last month from the estate, the government has now released valuations on everything from the car to his business interests and property. 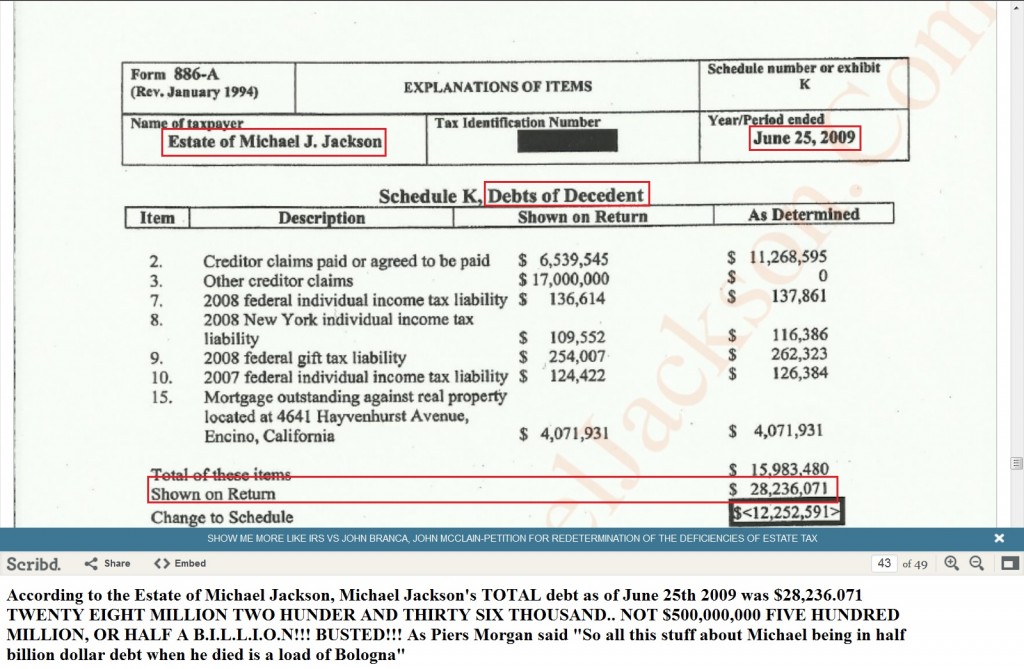 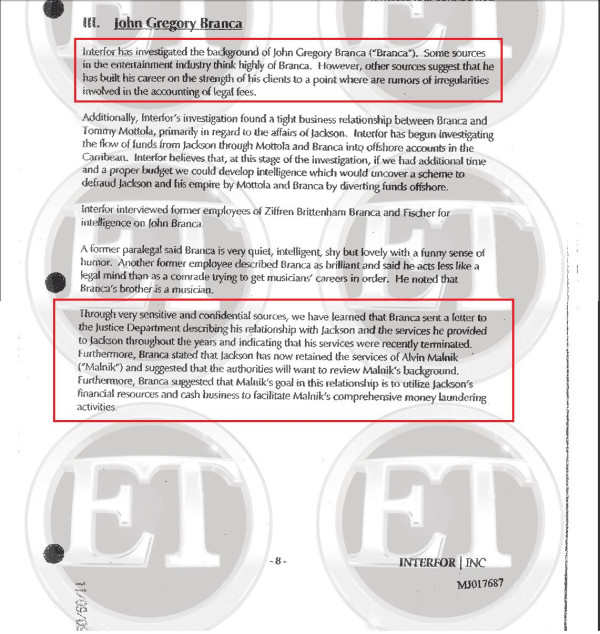