*** IMPORTANT – FOR IMMEDIATE RELEASE – PLEASE GO TO WWW.TEAMMICHAELJACKSON.COM TO TRANSLATE INTO YOUR RESPECTIVE LANGUAGE ***

TITLE OF PRESS RELEASE:  Team Michael Jackson Continues Campaign to Boycott any and all News Media Outlets and their Sponsors who offer and/or pay Conrad Murray “Blood Money” to tell his “story” of the Homicide of Michael Joseph Jackson

Team Michael Jackson (www.teammichaeljackson.com) is continuing the Project to Boycott any and all News Media Outlets and their sponsors who offer to and/or pay Conrad Murray Money after his release from Jail on Monday, October 28, 2013, to tell his story of the Homicide of Michael Joseph Jackson.  This includes, but is not limited to, the following Media Outlets:  Television Stations, Radio Stations, Newspapers, Books, Movies, Magazines, Tabloids, etc..

This “Boycott Conrad Murray Media Deals” Campaign represents the support of Michael’s millions of Loving Fans around the World and will clearly demonstrate the WORLDWIDE L.O.V.E., SUPPORT AND DEMAND FOR JUSTICE FOR MICHAEL JOSEPH JACKSON!

It has already been reported that Conrad Murray is “shopping” to tell his Story and WE WILL NOT support Conrad Murray, News Media Outlets, or their sponsors making money off of the Death of Michael Jackson.

It is NOT the time (and is not acceptable) to report negative or untrue information about Michael Jackson and it will not be tolerated.  Michael is DEAD and is not here to defend himself.

We have noticed that certain news media are already reporting false information leading up to the release of Conrad Murray, currently scheduled for Monday, October 28, 2013.

WE HAVE HAD ENOUGH!  It is NOT Wacko Jacko, It is MICHAEL JACKSON!  It is NOT Pedophile, It is Humanitarian!  It is NOT Guilty, It is Innocent!  It is NOT Bleach, it is Vitiligo!  It is NOT Addiction, it is Injury!  It is NOT a Freak, it is Emotional Abuse!  It is NOT Suicide, it is Homicide!  PLEASE LEAVE HIM ALONE!

THIS IS THE TIME – WE WILL BE MICHAEL’S VOICE AND LET THE ENTIRE WORLD KNOW WE DEMAND JUSTICE FOR MICHAEL JOSEPH JACKSON FROM AROUND THE WORLD!

This Media Release is respectfully submitted to you from: “TEAM MICHAEL JACKSON.”

To learn the TRUTH about the Homicide of Michael Jackson, please visit: 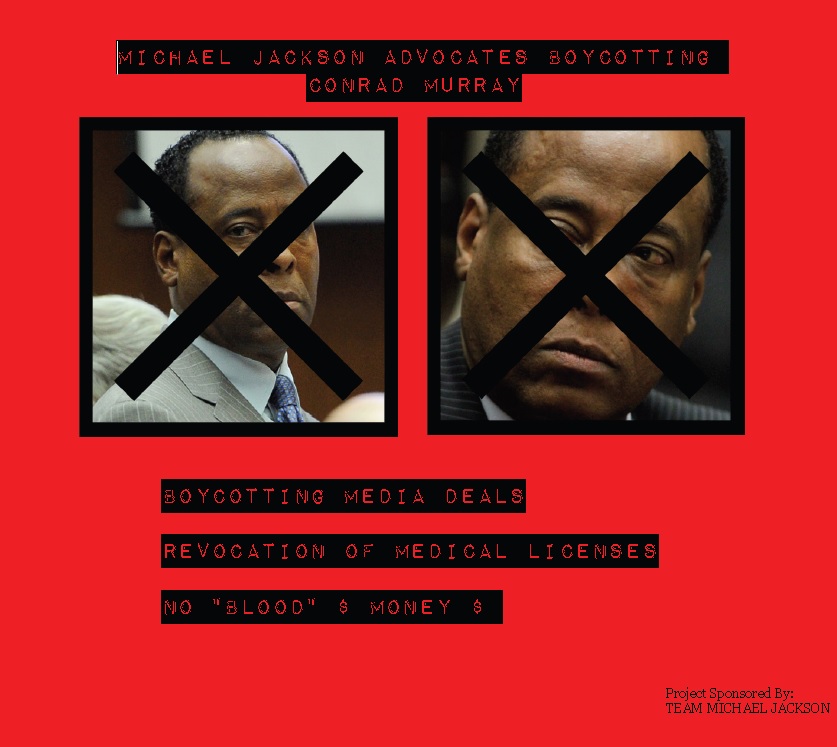 Team Michael Jackson requests you SIGN PETITION if you Pledge to Boycott any and all Media Outlets and their sponsors that offer and/or pay Conrad Murray $$ Money $$ to tell his “story” of the Homicide of Michael Joseph Jackson!

SIGN PETITION AT:    http://chn.ge/1a97YIl We boycott and will abstain from using, buying, viewing, or dealing with any company/organization and all of their sponsors.

Help us to send the message to television networks, radio stations, newspapers, book publishers, movie/show producers, tabloids, magazines, etc. that seek out and help Conrad Murray to profit from the Homicide of Michael Joseph Jackson!

PLEASE SPREAD ON FACEBOOK, TWITTER, AND ALL SOCIAL MEDIA SITES!!!We also advice fans to contact media in the country they reside in. Joining a Facebook group is not going to get the results we envision. We need to make noise via any/ALL media outlet.

As of today, October 27, 2013, the States of Nevada and Hawaii have only “Suspended” Conrad Murray Medical Licenses and (as we understand) he merely need reapply for those Medical Licenses to be reestablished.

In honor of the Memory of Michael Joseph Jackson and so that no other person has to suffer a “Death Sentence” like Michael Jackson did, we have to take the action to notify the Nevada and Hawaii Medical Boards and demand they immediately “REVOKE” Conrad Murray’s Medical Licenses.

Thank you for taking the time to support this very important effort!